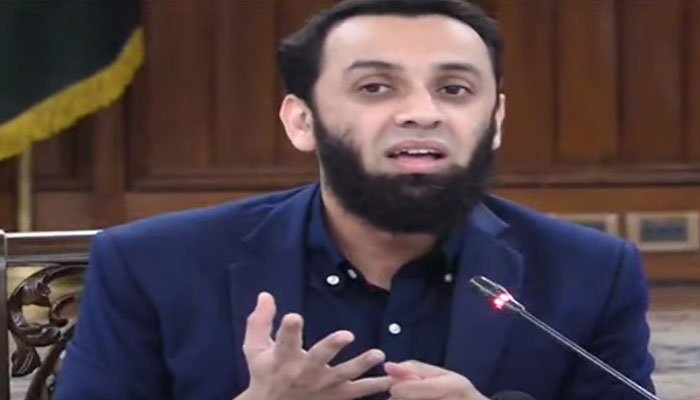 Farah Gogi, husband to be brought back to Pakistan through red notice: Atta Tarar

LAHORE: Accusing Farah Gogi and her husband Ahsan Jameel Gujjar of corruption, land fraud and running a racket of diamond smuggling, Punjab Home Minister Atta Tarar on Sunday vowed to bring back the couple via Interpol in the country.

Addressing a joint press conference flanked by Punjab Minister for Law Malik Muhammad Ahmad Khan, Tarar said that the government will fulfil all the legal requirements and make all efforts to get “red warrants” (an Interpol red notice) against the couple.

A red notice is an international request sent to the International Criminal Police Organization (Interpol) seeking the arrest and extradition of an individual.

He said that the chief executive officer of Faisalabad Industrial Estate Development and Management Company (FIEDMC), Rana Yousuf, and Special Economic Zone Committee Secretary Maqsood Ahmed have been arrested by the anti-corruption establishment in a case relating to the illegal allotment of a precious industrial plot to Farah Gogi.

He said that a 10-acre industrial plot situated in the Faisalabad Special Economic Zone was allotted to Farah Gogi for only Rs83 million and its actual worth was Rs600 million. The minister said that the plot was transferred to Gogi via a fake company.

A case has been registered in this regard earlier this month, he said, adding that Farah Gogi, her mother Bushra Khan and Ahsan Jameel Gujjar were nominated in the case.

He accused the former first lady of “dealing” in the Prime Minister’s House. “Imran Khan introduced a new system of money laundering in small packets,” he revealed.

He said that Imran Khan, along with his wife and Farah Gogi, was running a racket of money laundering via diamonds.

Giving details, Tarar said that the diamonds in small packets were smuggled abroad and were sold in black markets. He maintained that Imran Khan was leading the group.

Talking about a leaked audio call of Bushra Bibi in which she was reportedly directing Imran Khan’s focus person to prove the opponent a traitor, he said that she is the “mastermind”.

Pakistan under threat from ‘internal conspiracy’

Earlier, Punjab Minister for Law Malik Muhammad Ahmad Khan said that Pakistan is not under any threat from a “foreign conspiracy” as is the narrative being drummed by the PTI since it was removed from government, rather it is under threat from an “internal conspiracy” by former prime minister and PTI Chairman Imran Khan.

Malik Muhammad, said that the former premier would “more aptly” be called “Tosha Khan”, given allegations that he either claimed or sold off gifts given to him by foreign dignitaries instead of depositing them in the state repository known as Toshakhana.

The PML-N leader said that while Imran Khan was in power, he was nothing but praise for the army and its chief Gen Qamar Javed Bajwa, saying the government and the institution are on “one page”, and “also admitting that it had a role in keeping the government afloat”.

“But as soon as it returned to its original position of neutrality, the way Imran Khan badmouthed it, is before you,” said the minister, adding that negativity and evil was attached to neutrality.

“[Imran Khan made it be as though] if you remain neutral, you are opposing God and the Quran, and siding with evil.”

The Punjab minister said that Imran Khan is “the only man who thinks he alone is good”.