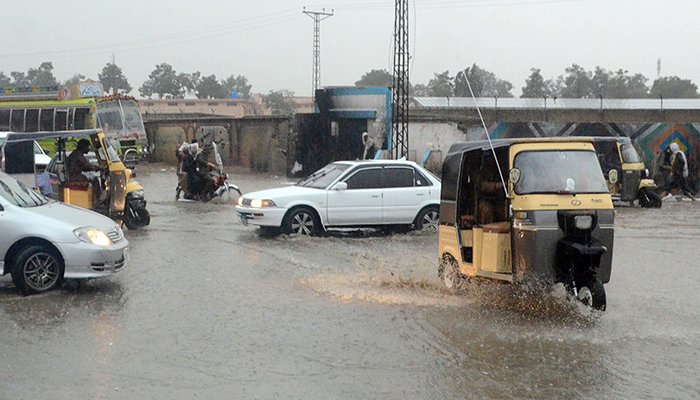 QUETTA/CHAMAN: The death toll in Balochistan increased by four to 10, as heavy rains pounded the province, leading to floods in several cities.

At least six people died a day earlier in rain-related incidents and 13 were injured in different parts of Balochistan, including the provincial capital of Quetta, according to authorities.

Today, as the downpour continued, a miner’s body was found who was swept away in a Mach flood, according to Levies sources.

Five mine workers were swept away in a flood, out of whom one died, two were saved, and a search for two others is still underway, the sources added.

In Toba Achakzai, the Provincial Disaster Management Authority (PMDA) said that a shepherd and his flock of 200 animals were swept away in a flood.

The PMDA said that the shepherd’s body has been recovered, while all the animals had also passed away.

In Tooba Kakri, Pishin, and Qilla Saifullah, the floods damaged more than 100 houses, gardens, and fields, the authority added.

The PMDA warned that the heavy rains would pound the areas and the flood-like conditions would continue as well.

Moreover, in Nasirabad, five people were swept away in a flood — one died, two were saved, and the search for one is still underway.

Meanwhile, several houses were flooded and vehicles stranded in water after Islamabad and Rawalpindi received 60mm of rain, the Water and Sanitation Agency (WASA) said.

According to the managing director of WASA, the heavy rain increased water flow at the Katarina point of Nullah Lai to 12 feet and at Gawalmandi Bridge to 9 feet.

Water entered the houses in Sector H13, and the walls of the area drain crumbled, leaving several vehicles stranded on the flooded roads.

The Rawalpindi commissioner said that authorities have been placed on high alert due to a fear of flooding in Nullah Lai.

The water level recorded at Nullah Lai is 17 feet, according to the WASA MD. He said that the water level is constantly being monitored and the “WASA machinery remains active”.

In addition, an army rescue squad has been called to the Nullah Lai bridge in case of an emergency.

Pakistan Meteorological Department has instructed the concerned authorities to keep the alert system updated and keep people informed of the situation in a timely manner.

The Rawalpindi commissioner has directed that water be immediately drained from low-lying areas and a report be submitted.