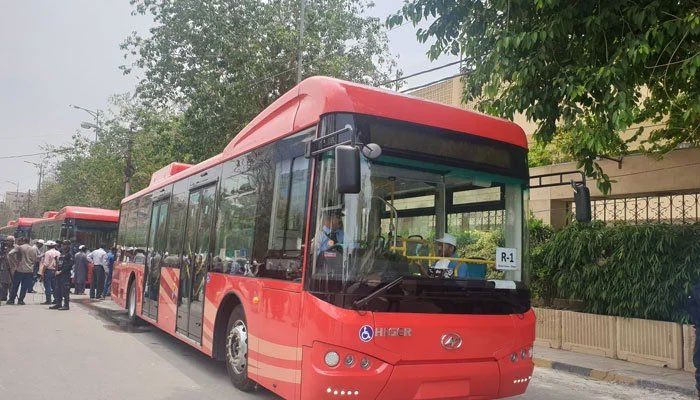 Karachi welcomed a new public transport facility – the Peoples Bus Service – Monday. The best part is: it won’t cost you more than Rs50 (depending on your route, of course).

It was inaugurated by Foreign Minister Bilawal Bhutto-Zardari. The politician had a ride on the bus himself as well to review the facilities.

Karachiites can now ride on the bus for up to Rs50 only.

A total of 240 red coloured hybrid air-conditioned buses have been procured from China for the intra-district bus project that became operational today. The buses will be plied on seven routes across the metropolis.

Sindh Minister for Information and Transportation Sharjeel Memon said that the bus service will be operational on Route 1, from Model Colony to Tower, which comprises 38 stations spread across 29.5 kilometres, under which 30 buses will operate from 7am to 12am.

Memon said that the service will kick off on the route from North Karachi to Korangi from next week and it will be fully operational on the remaining routes by August 14. He further stated that 130 more buses will reach Karachi port this week.

PPP senior leader Sharmila Faruqui also shared a picture of herself travelling in the newly launched bus service with other PPP leaders.