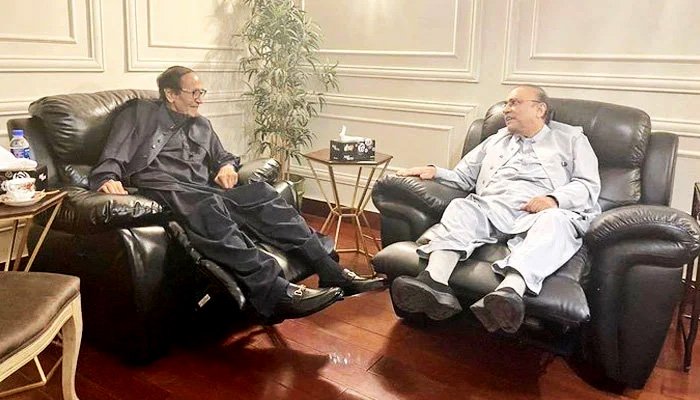 Zardari was at Hussain’s residence for many hours in his last-ditch effort to rescue the situation for the coalition partners and to save Punjab for the PML-N.

The veteran politicians, in one of the meetings that continued for several hours, used massage chairs, a picture of which was also released to the media. The photo triggered a meme flood on social media with the chairs stealing the limelight.

The photo provided netizens with fodder to lighten the mood amid a tense political environment in the country’s largest province.

‘I want those chairs’

Journalist Mehreen Zahra Malik expressed her desire to own the massage chairs.

“I want those chairs,” she said in response to a tweet.

‘A picture is worth a thousand  words’

Nasir Ahmed Kashmiri shared the picture of the two leaders having a discussion while seated on the massage chairs and said: “A picture is worth a thousand words.”

User Hamadullah Awan believes that it is an “impressive moment”.

Another user Blabidin shared the supposed make and models of the recliners.