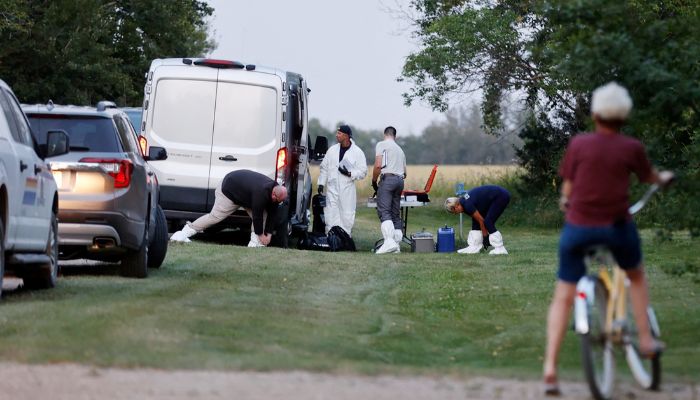 
The suspect sought by Canadian authorities in a weekend stabbing spree that killed 10 people in and around an indigenous reserve was arrested on Wednesday but suffered unspecified “medical distress” and died a short time later at a hospital, police said.

Official word that the four-day manhunt for Myles Sanderson, 30, ended with his death came during a late-night news conference hours after the Royal Canadian Mounted Police (RCMP) reported he had been taken into custody.

The RCMP said the arrest took place near the town of Rosthern, Saskatchewan, about 100 km (62 miles) southwest of the area where one of the bloodiest acts of mass violence in the country’s history unfolded on Sunday.

Canada’s Global News agency, citing multiple law enforcement sources, later reported that Sanderson had surrendered to police and was taken away alive in an ambulance after a highway pursuit in which police rammed his vehicle off the road. Global News said he died shortly afterward of unspecified injuries that authorities believe were self-inflicted.

RCMP Assistant Commissioner Rhonda Blackmore told reporters Sanderson “went into medical distress” shortly after he was detained, that emergency medical personnel on the scene attended to him and he was taken to a hospital, where he was pronounced dead.

She declined to address questions about whether he might have consumed a drug or other substance that killed him, saying an autopsy would determine the manner and cause of his death.

His older brother and accused accomplice, Damien Sanderson, 31, was found slain on Monday in a grassy area of the James Smith Cree Nation. Police were investigating whether the younger sibling might have killed his brother and that he may have sustained an injury requiring medical attention.

Blackmore said an emergency-911 caller who reported spotting Myles Sanderson before his arrest indicated he appeared to have had a visible injury.

In addition to the 10 victims killed on Sunday, 18 others were wounded in the rampage, which unnerved a country where instances of mass murder are rare. Police said some of the victims appeared to have been targeted, while others were apparently random.

Authorities have offered no motive for the attacks, which occurred on the James Smith Cree Nation reserve, home to some 3,400 people, and the nearby village of Weldon, about 320 km (200 miles) north of the provincial capital of Regina.

With Myles Sanderson’s death, “We may never have an understanding of that motivation,” Blackmore said.