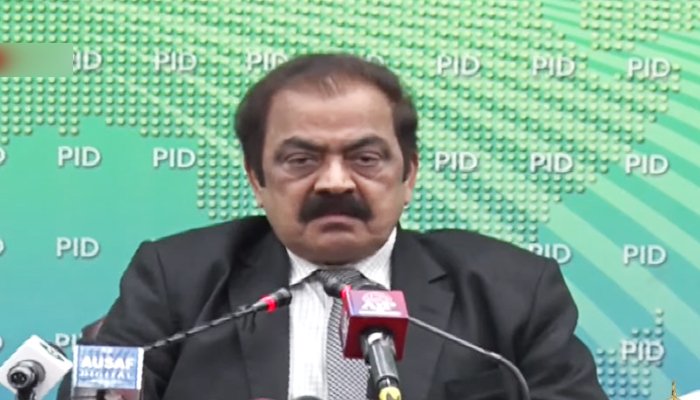 ISLAMABAD: As many as 50 PTI members of the Punjab Assembly (MPAs) can vote for PML-N’s  Hamza Shahbaz as the chief minister on July 22 (tomorrow), Interior Minister Rana Sanaullah claimed Thursday.

The interior minister, addressing a press conference, said: “Not five, but 50 PTI MPAs can either use their right to vote [for Hamza] or they might refrain from casting their votes altogether.”

The interior minister claimed that “Elahi does not deserve to become the chief minister” and demanded he voluntarily withdraws from the race.

He added that honourable lawmakers should “not waste” their votes on the PML-Q leader, who Khan had earlier termed a “dacoit”.

“We will use all our political options to the fullest,” the interior minister vowed as he said that the PML-N was in contact with the opposition lawmakers.

“The ones in PTI, who still have a conscience, will not vote for Elahi,” the interior minister said — just a day after he stated, “PML-N will not let the Elahi become the provincial chief executive easily.”

Before his press conference, Sanaullah, while speaking during Geo News’ programme “Geo Pakistan”, claimed that two lawmakers of the PML-N took money to switch allegiance ahead of the chief minister’s election in Punjab.

“These 20 seats belonged to the PTI, five of which have been claimed by the PML-N. We will lead with a two-thirds majority when PML-N and PTI will come face to face,” Sanaullah said.

He further added that if the Supreme Court summons him to prove his allegation, he will tell the Court how the money was distributed and upon whose direction.

Following the ruling of the Supreme Court, a run-off election for the chief minister of Punjab is slated for Friday, where  Elahi will face off against the incumbent chief minister, Hamza.

After the recent upset in the by-election, the PTI has swelled its ranks in the Punjab assembly to 188 votes, much above the 186 votes it needs for a simple majority in the House. While the PML-N and its allies have the support of 180 MPAs.