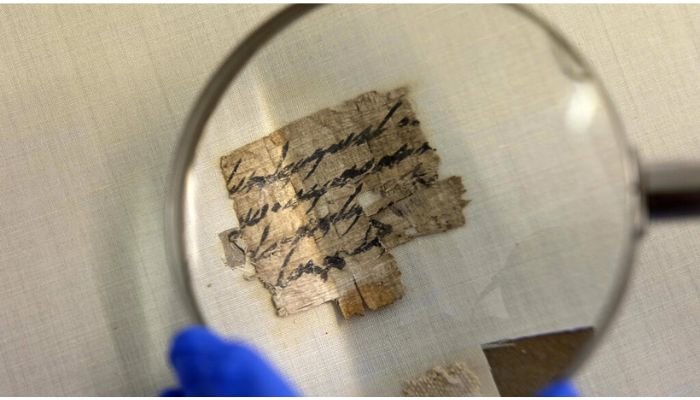 
JERUSALEM: Israel’s Antiquities Authority displayed Wednesday a rare papyrus note in ancient Hebrew dating back 2,700 years, recently brought back to Jerusalem after its chance discovery in the United States.

The letter fragment, written in the Palaeo-Hebrew used during the First Temple era, constitutes four lines beginning “To Ishmael send”, with the rest of the words incomplete.

“We don’t know exactly what was being sent and to where,” said Joe Uziel, director of the antiquities authority’s Judaean Desert scrolls unit.

Papyruses left in the dry climate of the Judaean desert could have survived the ages, but there were only two other papyruses from the First Temple era known to researchers before the latest discovery, Klein said.

“This papyrus is unique, extremely rare,” he said.

Ahituv was surprised to see in the book’s draft a picture of the “To Ishmael” papyrus, which he had not been familiar with.

He contacted Klein, and with the help of Yardeni’s daughter, managed to locate the US academic who had connected Yardeni to the owner of the fragment — a man in Montana.

The owner had inherited the papyrus from his late mother, who in 1965 purchased or received it as a gift from Joseph Saad, curator of the then Palestine Archaeological Museum.

Saad had obtained it from legendary Bethlehem antiquities dealer Halil Iskander Kandu, who Klein said had most likely bought it from Bedouin who found it in a Judaean Desert cave.

Back in the United States, the woman had framed the papyrus below a picture of Saad and Kandu and hung it in her home.

Klein invited the Montanan to visit Israel in 2019, showing him the Antiquities Authority’s facilities to persuade him that the rare artefact would be preserved best there.

“He was convinced, and at the end of his visit, left the papyrus with us,” Klein said, without providing further details on the man or process.

The authenticity and age of the artefact were determined using palaeographic and carbon-14 dating, Uziel said, noting researchers’ apprehension about removing the papyrus from the back of the frame.

“She used adhesive glue and glued it and then framed it,” he said. “Removing it will actually cause further damage to the papyrus.”

To Uziel, any discovery of an artefact “is really high,” but “when we come to the written word, it’s another level.”

“We actually can make a much closer connection to the people living in the past,” he said.