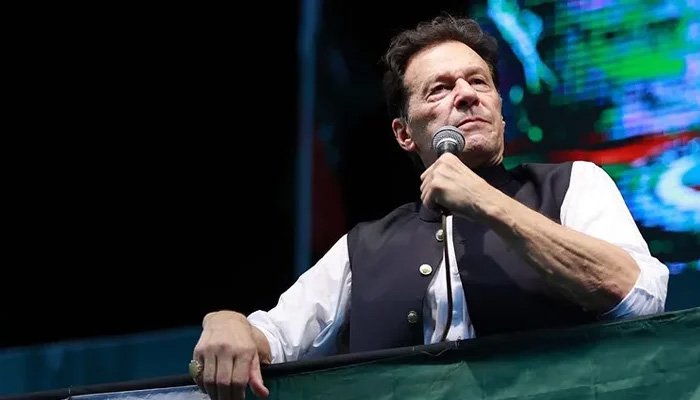 
ISLAMABAD: PTI Chairman Imran Khan again avoided issuing a direct apology in his second response to a show-cause notice issued by the Islamabad High Court (IHC) in a contempt of court case against him for allegedly threatening a judge.

At the last hearing, the IHC chief justice had asked Khan to ensure that he submits a “well-considered” response in seven days to the show-cause notice, otherwise the court would have its way.

In his first response to the IHC’s show-cause notice in the case, the PTI chairman did not apologise, offering, however, to withdraw his remarks “if they were inappropriate.”

In his latest response, which is 19-page-long document, the PTI chairman seemingly opted to tell the court that it should discharge the notice based on his explanation and follow the Islamic principles of forgiveness.

“That the purpose of the contempt law is not to punish anyone but to uphold the majesty of law. The respondent [Khan] believes in the rule of law and supremacy of the Constitution,” the response said.

The response noted that the courts have “always recognised” and followed the Islamic principles of forgiveness and restraint.

“The respondent beseeches that the said Islamic Principles of ufve and forgiveness would also be followed in this case,” the response pleaded with the court.

The PTI chairman said observations made have given a great opportunity to reflect on the important aspects of the matter that have a great bearing upon the rule of law and fair dispensation of justice in Pakistan.

He assured the IHC that he has profound regard and respect for this court and its subordinate courts and judges, who are dispensing justice to the common man in severe difficult times.

“The respondent takes this opportunity to express his deep regrets over his unintentional utterances during the course of his speech at a rally which was taken out in response to the shocking news of the physical torture of Shahbaz Gill.”

He stated that those utterances were “unintentional” and not meant to be directed towards the lady judge for whom he has “a lot of respect”.

Khan said that he never meant to hurt her feelings and if her feelings have been hurt, it is deeply regretted.

He also assured the IHC that he would not shy away from expressing his remorse to her.

“Those utterances were never meant to interfere with or in any way influence the course of administration of justice. The respondent believes that courts all over Pakistan are adhering to the rule of law and the constitution.”

The PTI chairman also blamed the ruling alliance for politicising the matter.

“However, unfortunately, in order to gain political advantage, it has been bitterly criticized out of all proportions by those who see an opportunity for political point scoring and to oust the Respondent from the political arena.”

“On the same issue, in order to political persecute the Respondent, an FIR was registered against the Respondent under the provisions of Anti-Terrorism Act, 1997.”

He said that he was not aware of the fact that any appeal or other legal proceedings in respect of the same subject matter were sub-judice before this court.

In the end, the PTI chairman appealed to the court to discharge the contempt notice issued to him.