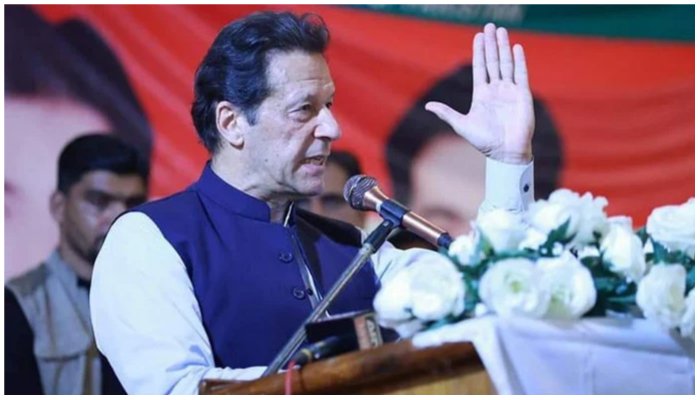 
CHISHTIAN: PTI Chairman Imran Khan on Wednesday claimed that a conspiracy was being hatched to topple the Punjab government, adding that “Mr X and Mr Y” were also issuing threats to him.

Speaking during a jalsa in Chishtian, Punjab, Khan said that a new political conspiracy was unfolding in the country in a bid to topple the Pervez Elahi-led Punjab government.

Addressing the crowd, the former premier said that Chishtian was not a stronghold of the PML-N as it claims, rather the party’s stronghold was the city of London.

“Overseas Pakistanis work hard to send remittances to the country but these people [PML-N leaders] steal money from the country and send it abroad,” he said, adding that the entire Sharif family was living in London and only visits Pakistan to earn money here.

He said that unless there was justice in the country, there would be no prosperity, adding that he saw big decoits in the National Assembly but petty thieves in jails.

Khan once again accused the Election Commission of Pakistan (ECP) and said that the body was a “pet of the coalition government.”

Issuing a clarification about the controversial statements he earlier issued against the Pakistan Army, Khan said that “this country is mine and the army is also mine.”

“I have never tried to undermine the institutions, but they [the government] are telling me to focus on the floods and ignore politics,” he said. “However, I will continue my haqeeqi aazadi (real freedom) movement to work against these thieves simultaneously.”

Sending a message to PML-N supremo Nawaz Sharif, Khan said that he was waiting for him to return to Pakistan.

“I am waiting for you, come back soon, the whole nation will welcome you in a way that has never happened to anyone in the history of the country,” Khan said, adding that the story behind Nawaz’s becoming an absconder started 10 years ago.

“The son of Shehbaz Sharif is also an absconder. Nawaz bought four palaces in London in the name of Maryam and now the nation is paying a heavy price for casting votes in exchange for small personal benefits”.