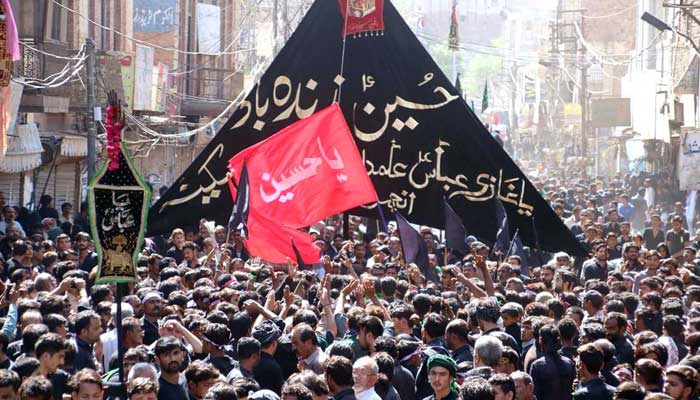 
KARACHI: Youm-e-Ashur is being observed today across the country with religious reverence and solemnity to pay homage to the supreme sacrifice rendered by Hazrat Imam Hussain (RA) and his devoted companions in Karbala (Iraq).

Muharram is the month of mourning for the seventh-century martyrdom of Hazrat Imam Hussain (RA), the grandson of the last Prophet Hazrat Muhammad (SAW).

The mourning processions are being taken out in all the cities and towns of the country as Muslims are performing mourning rituals to mark the Ashura.

Strict security measures have been ensured by the local management of different cities and some road closures were also in place to avoid any untoward incident.

Law enforcers, including police, Rangers, FC and others have been deployed along the procession routes. The azadars (mourners) would pay glowing tributes to sacrifices offered by Hussain (RA) and his companions for the supremacy of Islam.

Ulema and Zakireen would highlight the bright and candid teachings of Hazrat Imam Hussain (AS) and various aspects of Karbala tragedy. Medical camps, Sabeels and stalls are also being arranged to provide assistance to the participants.

Mobile phone services have partially been suspended as a security measure in different cities.

In Karachi, the main procession will begin from Nishtar Park at Parsi Colony at 1:00pm, pass through M.A. Jinnah Road, Saddar’s Empress Market, Tibet Centre and end at Hussainian Iranian imambargah in Kharadar.