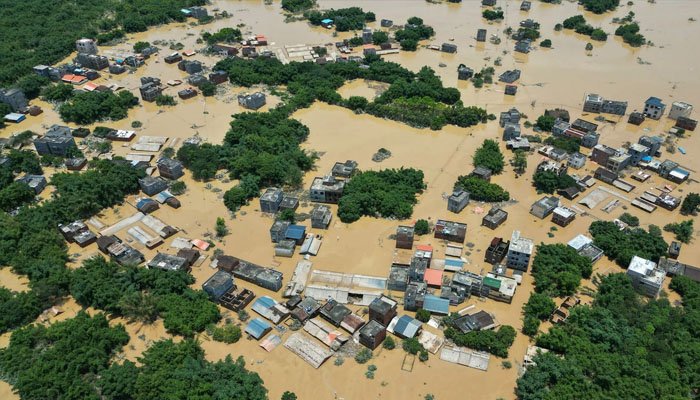 What is causing record floods and heatwaves in China?

BEIJING: Record floods in southern China this month displaced more than half a million people, while searing heat buckled roads in other parts of the country.

Authorities have issued extreme weather warnings in multiple regions, while experts warned that these phenomena were more evidence of the impact of climate change.

Summer floods are common in China, especially in the low-lying Pearl River delta region in the south.

This year, however, the National Climate Center forecast that flooding will be “relatively worse” and “more extreme” than before.

Water levels at one location in Guangdong province “surpassed historical records” this week, according to the ministry of water resources, while parts of neighbouring Fujian province and Guangxi region also reported record rainfall.

More than half a million people were evacuated this month because of the flood threat.

In the cities of Guangzhou and Shaoguan in Guangdong province, heavy rainfall turned roads into rivers and people had to be taken to safety in lifeboats.

Authorities in the province estimated the economic damage from the floods to be more than a quarter of a billion dollars.

Meanwhile, power demand surged to record levels in several cities in the north this week as residents cranked up the air conditioning to beat the heat.

China’s central economic planner estimates that extreme weather will shave off one to three percent of the country’s GDP every year.

The floods in China last year cost $25 billion – the world’s second-worst flood-related loss after Europe, a study published in April by reinsurer Swiss Re showed.

Chinese Premier Li Keqiang warned Wednesday that floods and heatwaves will affect the production of staple grains, vegetables and pork and push up inflation.

It followed a warning in March from Xiao Chan, deputy director of the National Climate Center: “Global warming and La Nina events are contributing to abnormally high temperatures and extreme rain in China.”

China has built a network of massive dams and “sponge cities” with permeable pavements to try and limit the devastation during the annual flood season.

“But the most damaging recent floods have occurred in areas historically less at risk,” said Scott Moore, a researcher at the University of Pennsylvania focusing on China’s environmental policy.

“This is a classic climate change effect: increased extreme weather in different regions and at different times of year than the historical average.”

China is the world’s biggest coal-burning nation and top emitter of greenhouse gases that lead to climate change.

It aims to become carbon neutral by 2060, but local governments have pushed up investments in both renewables and coal in recent months.

Beijing has also not yet outlined precisely how it intends to achieve its emissions targets.

Environmentalists have warned that without specifying the size of the peak or setting an absolute cap, China can essentially keep increasing emissions until 2030.

“The usefulness of weather forecasts caps out around 10 days, beyond which their accuracy rapidly drops to that of a coin flip,” think tank Trivium China said in a research note.

“Climate monitoring and forecasting is a whole different ballgame”, helping to predict severe floods and droughts at least a month in advance.