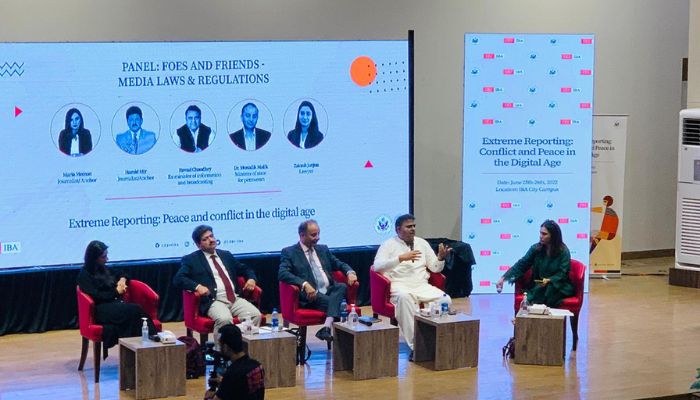 KARACHI: Former information and broadcasting minister Fawad Chaudhry Saturday emphasised on the need for reforms in which the “influential cannot dominate the media”.

He was speaking at the Centre for Excellence in Journalism’s “Foes and Friends — Media Laws and Regulations” panel.

Speaking at the panel, Fawad also stated that there is a need for stability and regulation that prohibits the media from personally attacking people or political parties.

He went on to claim that during Pervez Musharraf’s reign, the media was given more freedom.

In response to his statement, Hamid Mir argued that the media did not have freedom during Pervez Musharraf’s tenure, and that “it was because of journalists’ efforts and sacrifices that the media got freedom”.

“We weren’t served anything on a silver platter.” Cross-media laws exist in Pakistan, but they are not enforced, he added.

Mir stated, citing a study by Reporters Without Borders, that the four media groups in Pakistan dominate the readership in the country, which is why they get more business. Similarly, only nine channels account for more than 60% of total viewership.

“Now politics has gone bankrupt, so have journalists and institutions,” he remarked.

He said that the “elites” — politicians, journalists, institutions — have been shaken and dramatically affected by people who have a new platform on social media and are raising issues because they now have a voice as a result of media democratisation.

Hamid Mir remarked that “politicians and journalists blame each other, but it should be noted that not all fingers are equal, therefore not all politicians are corrupt, nor all journalists corrupt”.

Pitching in her views, Maria Memon said that when the government introduces new media regulations, the media interprets them as “censorship”.

Commenting on the phenomenon of fake news, Musadik Malik said that the unit of analysis is fake news these days, however, it should be people. “They should be asked why they are doing this,” he said.

“Journalism is all about the truth and there is no space for nationalism in journalism because you can lie in the name of nationalism,” he said.

Malik, however, chimed in saying “when national interest and public interest are separated, a country cannot move forward; they need to be aligned.”