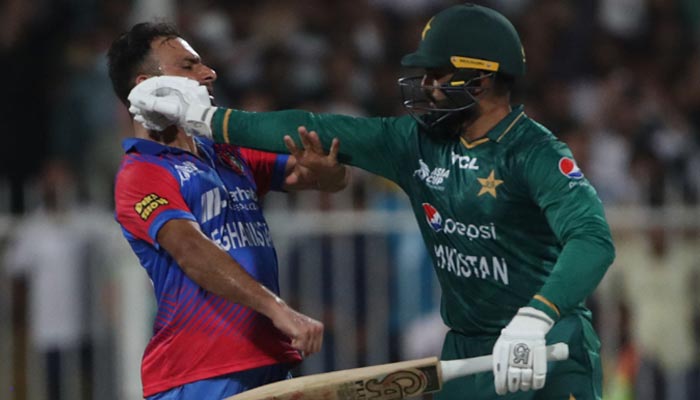 
SHARJAH: Pakistani aggressive batter Asif Ali and Afghanistan’s pacer Farid Ahmad had a heated argument on the field following the dismissal of the former on his delivery in the second last over during the Pakistan-Afghanistan match of the Super Four stage match of the ongoing Asia Cup 2022.

The two cricketers were involved in an intense exchange which began after Ahmad teased Ali after dismissing him.

Earlier, Asif Ali hit two sixes one of which was on Ahmad’s delivery.

The instance has, however, left netizens speculating what could have happened between the two players.

In a video, which has now gone viral, Ahmed is seen getting aggressive toward Ali first, after which he angrily raises his bat in the air as if trying to hit the Afghan pacer with it.

Soon after, both Afghan and Pakistani players, including Azmatullah Umarzai and Hasan Ali, stepped in to bring an end to the argument.

In the heat of the moment, Afghan player Fazalhaq Farooqi also quipped at Asif as he walked toward the pavilion.

While Pakistan won the match against the Afghan team, many are still discussing that what happened on the field was “unfortunate”.