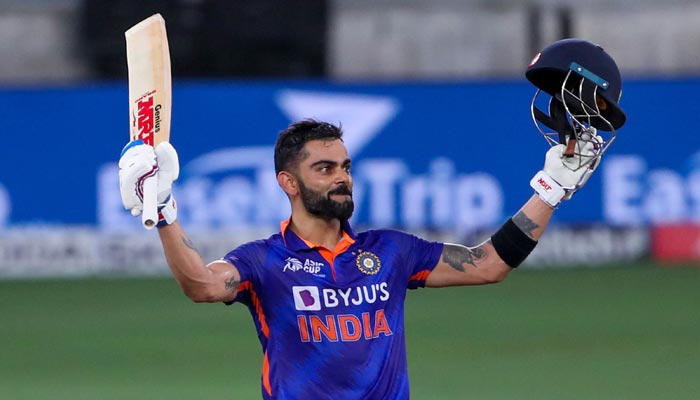 He reached the milestone with a four and six off pace bowler Fareed Ahmad to get a ton after nearly three years — his last hundred coming in November 2019 in a Test against Bangladesh.

An ecstatic Kohli dedicated his 71st international century to his wife Anushka Sharma and daughter Vamika as the cricket world started celebrating the end of a long wait for a three-figure score from the former captain.

“You see me standing here because one person has put things in perspective for me. That’s Anushka,” he said, speaking after ending his century drought.

Kohli said it was his wife Anushka Sharma who helped him put things into perspective as he took a brief break in the lead-up to the Asia Cup after a turbulent career phase in which he went through an extended lean patch and stepped down as captain across all formats of the game.

He said: “This hundred is for her and for our little daughter Vamika as well. When you have someone next to you having conversations putting things in perspective, like Anushka has been by my side through these time, time away from the game has thought me a lot of things”

“I know there was a lot of stuff going on the outside but they really kept my perspective right and I kissed my ring in the celebrations as well. You see me standing like this right now and all the things being put in perspective have been done by one person, who stood by me through all these difficult times that is Anushka,” Kohli said after hitting six sixes and 12 boundaries in Dubai.

Kohli last hit a hundred in international cricket in November 2019 in a pink-ball Test against Bangladesh at the Eden Gardens in Kolkata. Kohli had looked set to overtake Sachin Tendulkar’s stunning tally of 100 international hundreds but a lean patch that extended for over three years slowed down his charge.