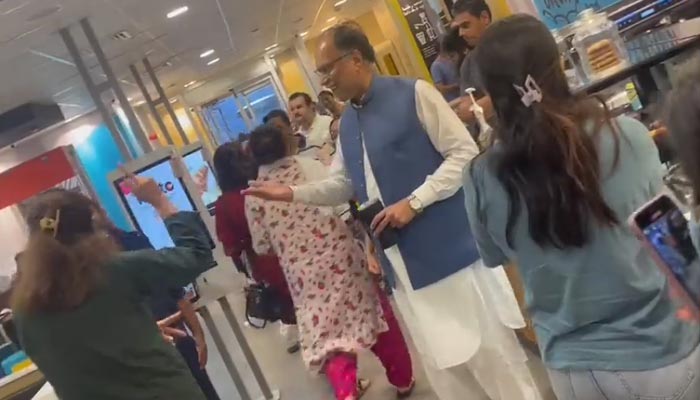 Federal Minister for Planning and Development Ahsan Iqbal was heckled by a group of PTI supporters on Friday when he went to a restaurant, a viral video has shown.

The visuals of the incident, where the pro-PTI supporters could be seen hurling abuses at the minister, took social media by storm as people started sharing the video on Twitter.

Many Twitterati condemned the incident and called it a manifestation of growing intolerance in politics.

The incident took place at a popular fast-food outlet where the lawmaker had visited to have dinner. Later on, taking to Twitter, Iqbal wrote: “Today, a family — who apparently considered themselves elites and supported PTI — clashed with me.”

Criticising the PTI Chairman Imran Khan for instilling hatred among people, Iqbal wrote: “Just like their ignorant and lunatic leader, his supporters are following suit.”

Retweeting a condemnation tweet, the planning minister further said: “These people, who claim to be literates, are actually ignorant and fascist just like the followers of Hitler.”

“We are neither going to get intimidated by them nor we would surrender because of them,” he wrote, adding that such people are the moving proof of PTI’s “mental bankruptcy”.

“Imran [Khan] is polarising the society at the behest of illicit funders,” he added.