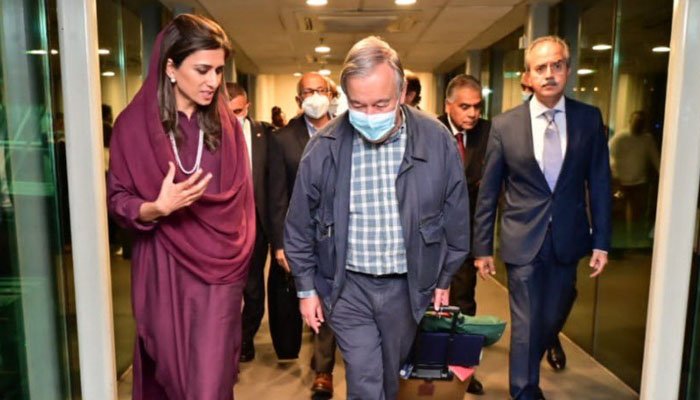 UN chief in Pakistan on solidarity visit after catastrophic flooding

More than 1,300 people have died with millions being compelled to live under open skies and tents as monsoon rains wreaked havoc across the country.

Due to heavy floods, many villages were swept away while other areas are cut off because of badly damaged bridges and roads. Rescue and relief operations are still underway as government and other welfare organisations are struggling to deliver aid and food to the flood affectees.

Therefore, to express solidarity after catastrophic flooding in Pakistan, the UN chief reached Islamabad, where Minister of State for Foreign Affairs Hina Rabbani Khar received him at the airport.

After reaching Pakistan, the UN chief again appealed to the international community to help Pakistan in this difficult time.

“I have arrived in Pakistan to express my deep solidarity with the Pakistani people after the devastating floods here. I appeal for massive support from the international community as Pakistan responds to this climate catastrophe,” he tweeted.

According to the Foreign Office, the UN secretary general visit will go a long way in expressing solidarity with the government and people of Pakistan, braving a colossal climate-induced natural disaster caused by unprecedented rains and floods across the country.

“During the visit, Secretary General Guterres will have meetings with the Pakistani leadership and senior officials to exchange views on the national and global response to this catastrophe caused by climate change,” said the Foreign Office spokesman.

The UN chief will travel to areas most impacted by the climate catastrophe. He will interact with displaced families in the field and oversee the UN’s humanitarian response work in support of the government’s rescue and relief efforts for millions of affected people.

“The Secretary-General’s visit will further raise global awareness about the massive scale of this calamity and the resulting loss of life and widespread devastation. It will contribute towards enhancing commensurate and coordinated international response to the humanitarian and other needs of the 33 million affected Pakistanis,” added the spokesman.

The dignitary is also expected to visit the most-affected areas, including Balochistan and Sindh (Sukkur, Usta Muhammad, Mohenjo Daro and Larkana) where he will meet first responders and interact with people displaced by the floods. “He will also have a press talk at Karachi airport on Friday evening having personally witnessed the situation in several flood-hit regions”, said the spokesman.