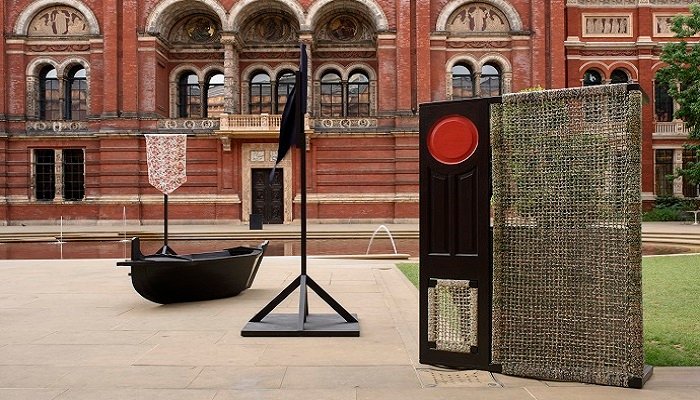 
A three-part art exhibition crafted by British Pakistani artist Osman Yousefzada is running at the Victoria and Albert Museum in central London.

With one exception that refers to colonial buildings as spaces “divided according to race and class”, the descriptions about Yousefzada’s exhibition do not explicitly mention colonialism.

Instead, the artwork focuses on aspects of the Pakistani, and wider South Asian, identity that exist apart from and in spite of British colonialism which, much like in many British conversations, often remains an unspoken but known spectre hovering just below the surface.

While the theme of colonialism was not often explicit, it is naturally difficult not to reflect on it. The V&A, named after the very monarch once declared the ‘Empress of India’ and her consort, seemed the most appropriate place in the UK for an installation depicting the themes of partition.

Education on the impact and aftermath of colonialism should strike at the heart of society and leave an indelible mark on our minds, just as this exhibition does.

After all, it was within the context of the British colonial powers intensifying the communal tensions and animosity through divide and rule, coupled with fears for the preservation of the Muslim community in an independent, Hindu-majority India, that the demand for a separate Muslim homeland within South Asia originated.

But, this exhibition reminds us that the Pakistani identity encapsulates so much more than this, with many of its aspects pre-dating or separate from what the British did in South Asia.

Three tapestries hang at one of the entrances to the museum. They depict figures described as “suggestive of ancient Talismanic figures, and storytelling,” inspired by a book called Falnama, which would later become the roots of tarot cards used in Mughal India among other places.

The figures are also said to reflect those found at Mohenjo Daro, an ancient Indus civilisation settlement situated in Sindh. The striking relevance of this piece to the overarching themes appears to be that it contains figures who have a “long history of struggle who do not see themselves as ‘the good immigrant.”

The tapestries are an important reminder of the rich history of the land of Pakistan. It stands at the crossroads between diverse civilisations, cultures and religions during many different stages of history: a crucial challenge to the colonial mindset that believed it ‘discovered’ places and brought ‘civilisation’ and ‘history’ with it. Instead, each pre-existing civilisation represents a thread woven into this larger tapestry that constitutes modern-day Pakistan, influencing folklore, language, dress and music.

Another work in this challenging exhibition is a sculpture that looks like a tall stack of shelves, on which are placed household objects wrapped in fabrics or plastic.

Described as an “altar to female migratory experience,” it is a “tribute to the hidden women who were not able to or did not possess the codes to integrate in new lands”.

Indeed, its positioning within the stairwell feels like a nod to the fact that the female voice has been sidelined, not occupying the central stage of our attention. But women had their own experiences of partition, most upsettingly the well-documented kidnappings and rapes in addition to upheaval.

But this sculpture, as an “act of agency in patriarchal spaces,” works to identify and remember those women. As the artist suggests, every unique fold and knot were “their marks of identity and ownership.”

The garden is home to a third part of the installation. To echo the fluidity of migration and change, the work consists of movable peerhi stools. In the centre are charpai beds made from salvaged fabrics and wood, the latter from what would have been pieces of colonial architecture which the artist describes as having been “dropped from vertical to horizontal axis, shifting the power dynamic from a hierarchical to communal architecture.”

This felt like a lesson, that something quite beautiful and familiar has been salvaged from the ugly, unequal power distribution of colonialism, which South Asians have dismantled and, from it, reformed and remade their traditional items that have a history apart from the British. This would certainly be an emotive act of defiance and reclaiming.

The remainder of this section consists of a wooden vessel placed not on the water but on dry land, designed to symbolise “colonial expansion and present-day climate precarity.”

While Pakistan has for decades been listed among the most vulnerable countries to climate change, this year’s heatwaves followed by extreme flooding hit home this point. A country that contributes relatively low carbon emissions is bearing the brunt of climate change, when former colonial powers, like the UK, have contributed more and yet suffer less. Displacement is not confined to the history books but a lived experience of today, with this year’s flooding causing migration, loss of life and the destruction of livelihoods. Unless swift action is taken by nations collaboratively to combat climate change, these experiences will become the new normal.

This exhibition plays a vital role in inspiring us to reflect upon the realities of displacement, integration and climate change by inhabiting our public spaces. It challenges the whitewashing of colonial narratives by providing an insight into the multifaceted traditions that thousands of years of history has fostered in the land that modern-day Pakistan inhabits today; traditions that not only pre-date British history in South Asia, but have survived it. And for all these reasons, Osman Yousefzada’s exhibition most certainly deserves a visit.

The writer is a researcher and is currently undertaking a PhD. She tweets @MaryFloraHunter.