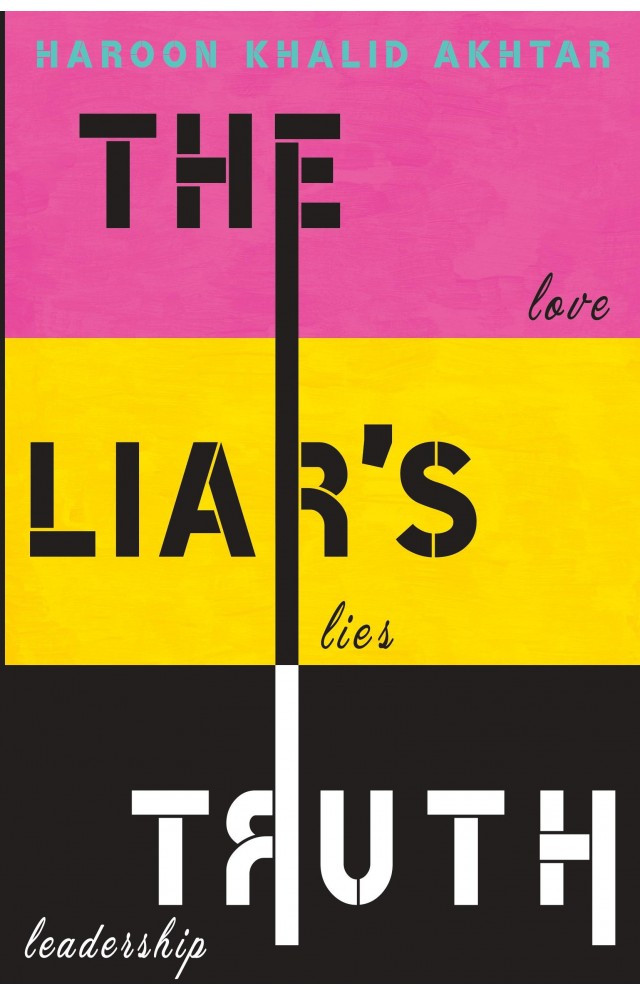 The Liar’s Truth In The Age Of Misinformation

Mainstream media consumers are on many occasions left part-amused, part-horrified by the manner in which debates, conversations, and even news telecasts unfold. In addition to this frontier, with the advent of digital media as a viable and impactful communication platform, this back-and-forth has, in many ways, slid into an even messier downward spiral of the deliberate spread of political misinformation, and the doubling down on relentless mud-slinging.

One often wonders where one can turn to, in order to consume content that is intelligent, and passed on in a way that is well outside the frequent boundaries of the mundane and, quite frankly, embarrassing. Haroon Khalid Akhtar constructs The Liar’s Truth as that well-paced, gripping medium of consumption, making it an intellect-fueled, fascinating read.

Before one manages to get their hands on the book, one goes in with a presumptive attitude. Perhaps, one wonders, this is another book that harps on about the common man being a vehicle of change, having been given great responsibility; a second coming-of-age, with stepping out of the shadows of the ordinary and propulsion into the remarkable as a key theme. One may even mistakenly assume that the narrative might be predictable, with a storyline that doubles as a sermon or lesson. Akhtar casts these assumptions aside at the very beginning, and goes on to prove one wrong at every turn, concocting mind-boggling mayhem that connects with the reader in a fascinating way.

Akhtar’s delightfully built world follows the tale of Arsalan – or Guppy, as he is affectionately referred to – a common man with a thoroughly fertile imagination, who has settled into a routine that offers him little to no solace. An unexpected break in his life comes at a point where he receives a mysterious (and initially, confusing) call that is set to change the course of his life. Inundated with rib-tickling metaphors that make The Liar’s Truth a bravely written read, it is the call that Arsalan receives from Zeus (yes, the one on Mount Olympus) that triggers a transformative sequence of events.

To summarise the plot, without giving much away, Arsalan – once a layman – is selected to be the premier of his country, despite a complete lack of know-how, and a crippling lack of skills. Inexperienced, naive Guppy has, as reinforcement, an equally oblivious rag-tag team, made up of a club singer, a stunning model, a pimp, a scientist, an ambulance driver, and a matchmaker. Amongst all this hullabaloo, a secret plan is underway, being formulated to hang Arsalan by making a case for the fact that his love is a spy. All this eventually leads him to the gallows from where he pens this rich, tongue-in-cheek memoir-cum-exposition laden with poignant literary gems.

Over the course of fourteen chapters, Akhtar empowers Arsalan to be an incredible storyteller – one who keeps readers hooked with an impeccable sense of humor. The conversational unfolding of events allows one to immerse themselves in the universe of the text, becoming a willing participant in all that takes place. Satire, wit, and ingenious political commentary amalgamate to contribute to the narrative, making The Liar’s Truth an exceptional page-turner that one cannot put down.

One can easily place Arsalan, Zeus, and other recurring characters into our universe. In fact, the countless similarities that exist between Arsalan’s world and ours open up a portal of parallels, making the book all the more interesting. Indeed, the lines between fact and fiction are blurred in The Liar’s Truth in the most spectacular way. Semblances of the ongoing political circus, and its history that has a tendency to repeat itself, make an appearance in Arsalan’s frenzy-driven life, and picking out those instances, as a latent realization clicks within the reader’s mind, add to the overall experience of devouring the novel as well.

There are many aspects of Akhtar’s narrative that hit home, perhaps in a manner that lies outside one’s zone of comfort, invoking a sense of unease and making one reflect on their own helpless impotence and lack of active action. For instance, early on in the story, Arsalan talks, in passing, about generated chaos, and the spread of successfully manufactured hatred at an alarming rate.

While this brief mention is stated rather casually, it juxtaposes, with immense resonance, with the current state of affairs within the nation, where giants generate chaos higher up on an ivory-tower hierarchy, watching it trickle down for their own benefit, manifesting as seemingly unsolvable, yet crucial differences between the common man. In addition to this, Arsalan also highlights the need for a scapegoat, who bears the brunt of all that transpires, and is, almost always, the common man as well – a fact that seems to be, in retrospect, a self-fulfilling prophecy.

The repetition of history – the constant, tired, rewriting of the same chronicles with rotating characters – is another significant part of the novel. It is also an aspect that makes one do a double take, switching back and forth between the text within the book, and the bombardment of content on mainstream channels that have become akin to white noise within a local context.

Furthermore, the entire conceptualisation of an all-knowing, powerful, resourceful Greek god who keeps tabs on Arsalan, alongside many others, wishing to alter the state of being of a developing nation from an eagle-eyed perspective is, undoubtedly, a “heavenly” likening, and a stroke of creative ingenuity. One cannot help but grin, utterly bemused, by the presence of this self-proclaimed kingmaker in Arsalan’s life, and the impact of this detached diety’s actions for what is passed off as the greater good. In fact, one begins to conjure up a very specific suggestion for a vehicle that Zeus would potentially lean towards possessing, given that he chooses to utilize a very modern, and very human mode of interaction – a phone.

One particular takeaway that one tends to ponder over once the novel ends is the idea of a constructed narrative – a drummed-up public relations message-cum-campaign on steroids that spirals into positioning itself as the absolute truth. As we are made aware at the very beginning by Arsalan, the book follows his version of the truth – the way reality unfolded before his eyes.

However, the contradictory truth that exists is spread and believed as well, opening up a conversation on fabricated realities. One feels deeply unsettled, fully taking into account the fact that everything that is peddled to us is one version of a lie – for the absolute truth may have never existed in the first place – and it is the most convincing, most well-marketed lie that sells for a certain amount of time, till the next lie is created. Undoubtedly, when one infers this from the text, the avenues of questioning data and information around one crack open wide into multiple directions, leading to a spiral of further questions that are – and may continue to remain – unanswered.

In all of this, Arsalan’s innate humanness makes him a wonderful protagonist – one with whom we forge a relationship in a strange way, and one in whom we may even, at times, catch glimpses of our own selves. While Arsalan does not openly masquerade as a microcosm for most of us, there are certain hints of commonalities that aid in developing the many emotions we feel for the man narrating his own tale. On the other hand, Akhtar also births Arsalan in a way where the latter is a quick-witted narrator, and we must pay a great deal of attention to all he states, for a lot of the exchange between our hero and the reader is laden with meaning and humor.

The author takes a tale, that is, on the surface, one that follows the ebb and flow of a political leader’s journey. However, Akhtar injects magic into the very spinal cord of his book, allowing readers to be swept under a spellbinding wave that marries fact and fiction. From the bigger punchlines to the subtle shots, Akhtar outdoes himself at the flick of every page, masterfully balancing the message he wishes to convey with varying tonalities.

When one touches upon the tonality of the book, it becomes imperative to highlight how skillfully Akhtar utilizes Arsalan. At many points, one finds themselves circling back to the idea of absolute truths, given that Arsalan, himself, at many points throughout the story, speaks in a manner that is befitting of a politician.

From sounding delusional in one instant, to employing grand political rhetoric in the next, one finds themselves wary of Arsalan at times, further creating chaos on a microcosmic level within the mind of the reader. After all, is Arsalan not a mere tool in a story, written by the truths that exist within the author’s reality? One finds themselves running in circles, trying to chase a singular thread that could give way to a narrative in which one can fully place faith. Perhaps, that is the lesson for readers, when all is said and done. In the absolute circus that is the sociopolitical sphere, one must always be prepared for smoke and mirrors.

The Liar’s Truth is Haroon Khalid Akhtar’s second novel, and in this nearly two-hundred page body of work, one can spot instances where Akhtar remains heavily influenced by his father, the renowned writer, Mohammad Khalid Akhtar. Indeed, many of those who have consumed Akhtar’s father’s work have been able to notably shed light on the pleasant similarities between the wit and humor the father-son duo have shared, while maintaining the fact that individuality, and making a piece of text one’s own, were key parts of the process.

Summing up, one must hand it to Haroon Khalid Akhtar for his courageous and revelatory plunge into the deep, dark sea that is the sociopolitical sphere of our nation. Without a shadow of a doubt, the novel is a testament to Haroon Khalid Akhtar’s artistic and creative lenses. Touching upon, from time to time, and borrowing from the reality in which we reside makes The Liar’s Truth a dangerously gratifying read, as one grapples with the fragility of all one knows to be true, whilst also begrudgingly acknowledging the fact that enjoying the novel far too much might greatly become a cause for displeasure for the all-seeing, all-knowing, omniscient eye of Zeus.