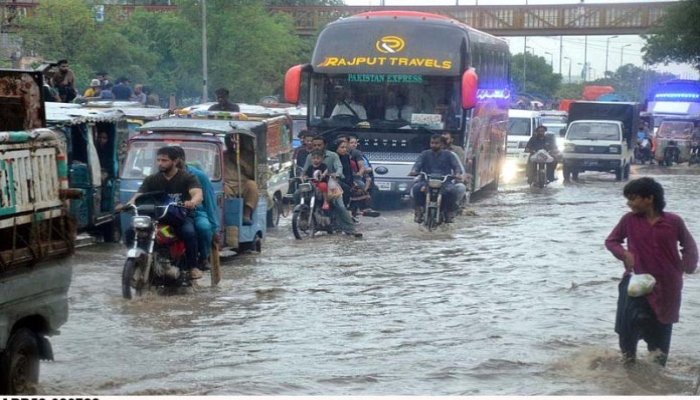 At least six people lost their lives in rain-related incidents on Friday as heavy rainfall wreaked havoc in Karachi, bringing up the toll in three days to 14.

According to The News, two sacrificial animals also died of electrocution.

Following a rain forecast, different areas of the port city continued to receive moderate to heavy showers under the influence of a monsoon system that is present over Karachi.

The most rain was recorded in the Gulshan-e-Hadeed neighbourhood, which received 94.7mm of rain during two spells.

The Shah Latif police said Ruqayya Mubeen Shah, 38, was working at home in Bhains Colony when she got an electric shock and died, adding that her body was taken to the Jinnah Postgraduate Medical Centre.

Similarly, Sawera Ghulam Mustafa was at home in Baldia Town’s Mawach Goth when she got electrocuted, according to the local police, who said her body was taken to the Dr Ruth KM Pfau Civil Hospital Karachi (CHK).

In Manghopir, Raqeebullah Sardar Khan, 23, got an electric shock from a wire at home, said the police, adding that his body was taken to the Abbasi Shaheed Hospital (ASH), from where his family took it away without completing the medico-legal formalities.

In the Garden neighbourhood, Abdur Rehman, 20, was electrocuted while working at a shop in the Shoe Market, said the police, adding that his body was taken to the CHK.

It is pertinent to mention here that three people were electrocuted to death and two more were killed after a roof and a wall of their respective houses had collapsed on the first day of rain in Karachi.

Three more people died of electrocution on the second day.

As for animal casualties, the Brigade police said a cow and a camel were electrocuted in the Lines Area. The locals said the sacrificial animals had been tied to an electric pole, and they blamed K-Electric for the incident.

Rescuers also recovered the body of a man who had drowned in the Gadap river, while the search for his father was under way. Police said that three men on two motorbikes had lost control of their vehicles due to the river flooding.

Officials said Raheemuddin had been saved, but the father and son had drowned. They said the body of Liaquat Hussain, 19, had been recovered now, but his father Ghulam Hussain was still missing. Police said the body was taken to ASH, adding that the deceased was a resident of Gadap City, and that the incident had occurred when he and his father were on their way home.

Intermittent rains once again exposed the city’s drainage system and the Sindh government’s claims regarding its rain emergency plans. Several main roads and streets were completely flooded, while hundreds of commuters were stranded without any help.

Rainwater entered various houses in Gulistan-e-Jauhar Block 12. A resident, Aslam Siddiqui, said the Cantonment Board Faisal had not gotten the storm water drain cleaned, resulting in flash floods in the neighbourhood.

“Just two days before Eid our furniture, carpets and clothes have been damaged,” he said, adding that all their focus had been on saving their sacrificial animals, so they could not manage to secure much from their house.

Mosamiyat, Munawar Chowrangi, Jauhar Chowrangi and Jauhar Morr were blocked for traffic movement because these areas were flooded with knee-deep water. The newly constructed University Road, on which millions of rupees were spent, was also completely under water, and inaccessible for vehicular traffic from Nipa to Shaheed-e-Millat Road.

New MA Jinnah Road and Jehangir Road, where the ruling PPP’s and the Jamaat-e-Islami’s headquarters are situated, were also completely submerged by rainwater.

The traffic police said Shahrah-e-Faisal at Drigh Road was flooded with rainwater and inaccessible for traffic movement, while Rashid Minhas Road at Jauhar Morr, Lalu Khait towards Hassan Square, University Road at Safari Park, Nipa and Hassan Square were flooded and traffic was stuck.

After the Korangi River flooded, the Korangi Causeway was closed for traffic, leaving the commuters to use only the narrow two-lane Jam Sadiq flyover to reach any other part of the city.

Qayyumabad Chowrangi and the expressway were also badly affected due to the accumulation of rainwater, disrupting traffic movement from District Korangi towards the South and East districts.

Several people visiting the sacrificial animal market or making their way back from the market found themselves stuck in traffic due to the flooding of the Super Highway. The Karachi Development Authority’s team reached the M9 for a rescue and drainage operation late in the night.

Karachi Commissioner Muhammad Iqbal Memon visited District Malir and Korangi to monitor the rain-related works. He sought help from the Pakistan Navy in the rescue operation, saying that those who had been drowning in the Korangi river were rescued by the PN.

Malir Deputy Commissioner Irfan Salam Mirwani briefed the commissioner that three people had been drowning due to flooding in the Lath River in Gadap Town, but one of them was rescued immediately.

Karachi Administrator Barrister Murtaza Wahab said during his tour of the city that drainage is under way in the low-lying areas. “Wherever there were choking points in storm water drains, they have been reopened. The condition of the drains is better, and pumps and heavy machinery are being used to drain the water.”

On Wahab’s orders, pumps were installed at the Metropole, in Shireen Jinnah Colony, in Kharadar, at the Shaheen Complex, at the PIDC and in other areas. He reviewed the rain-related situation in the Lea Market, Kharadar and Chakiwara areas, and directed expediting drainage in the Empress Market, Numaish, Gurumandir and adjacent areas. He said that drainage work at the Gujjar Nullah and at other small drains is in progress. “Garbage is being continuously removed from the drains.”

K-Electric said in its press statement that it has been ensuring uninterrupted power supply to major parts of the city during the ongoing monsoon rains. The KE spokesperson stressed that the maximum number of affected feeders were fewer than 150 of the over 1,900 in the company’s network.

The spokesperson said that the majority of them were temporarily powered down due to the prevalence of illegal connections or waterlogging, which could pose a safety hazard, adding that power to these areas was immediately restored upon receiving clearance from the ground teams.

“Heavy rains causing waterlogging in the Gulshan-e-Hadeed and Gadap areas affected the operations, and the utility requested civic agencies for support in draining water to safe levels to begin restoration efforts.”

Expressing sympathies and offering condolences to the families who lost their loved ones due to electrocution, KE categorically stated that no utility infrastructure was involved in any of the incidents reported.

Meanwhile, the Pakistan Meteorological Department (PMD) has forecast more rains in Karachi ahead of Eid-ul-Adha with the warning of urban flooding in low-lying areas of the city.

“Heavy rainfall is expected in the outskirts of the city. The current rain system will continue till tomorrow evening or night,” said Sardar Sarfaraz.

The Met Office said yesterday that monsoon currents are continuously penetrating the country and are expected to weaken over the next 24 hours before strengthening over the weekend (July 9 and 10).