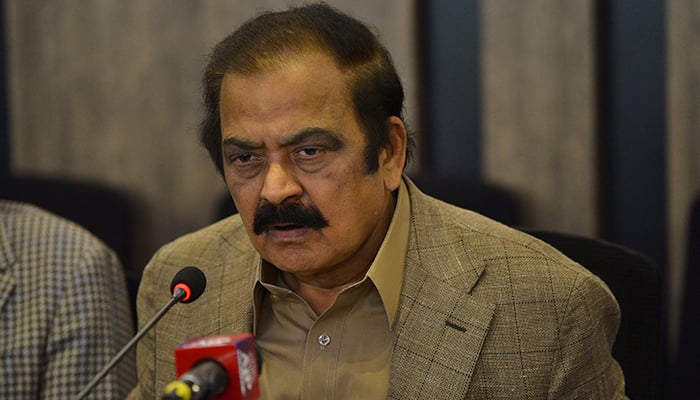 
Minister for Interior Rana Sanaullah said Monday that if Pakistan Tehreek-e-Insaf (PTI) Chairman Imran Khan wants to hold talks with the government, then he should come straight to the point with no strings attached.

“I had told Imran Khan on November 26 that he would not get the election date from Pindi. I had also said earlier that Imran Khan should contact politicians for elections,” he said while speaking on Geo News’ programme Aaj Shahzeb Khanzada Kay Saath.

Sanaullah’s statement comes after the PTI chief showed his willingness to halt the dissolution of the Punjab and Khyber Pakhtunkhwa assemblies if the coalition government agrees to conduct elections by the end of March next year.

In an interview with a private news channel, Khan said: “If they are ready for elections by the end of March, then we won’t dissolve the assemblies. Otherwise, we want to conduct polls by dissolving the KP and Punjab assemblies.”

Taking a further hardline approach, PTI Senior Vice-President Fawad Chaudhry said if elections talks do not materialise by December 20 then the party will dissolve the Khyber Pakhtunkhwa and Punjab assemblies on December 21.

But as the PTI tries to pressure the government, a confident Sanaullah challenged Chief Minister Punjab Pervez Elahi to dissolve the provincial assembly as the Pakistan Muslim League-Nawaz (PML-N) and its allies were ready to contest the elections.

“The political damage that we have already sustained ends here, no more,” Sanaullah added.

The interior minister recalled that the CM Punjab and his son Moonis Elahi have claimed that former chief of army staff (COAS) General (retd) Qamar Javed Bajwa had advised them to join hands with the PTI.

“When Pervez Elahi came to an understanding with us, why did he need to talk to Bajwa Sahib? Even if he had to, then why didn’t he do so before reaching an agreement with us?” he wondered.

Slamming the PTI and Pakistan Muslim League-Quaid (PML-Q), the interior minister said both parties are recalling issues related to the ex-COAS after his retirement.

In back-to-back interviews, CM Elahi has maintained that the former chief of army staff Gen (retd) had asked the PML-Q to side with the PTI.

Before CM Elahi, Moonis had revealed that Gen (retd) Bajwa had advised his party to back the PTI when the no-confidence motion was moved against former prime minister Khan.

Not only this, but the PTI chief has accused the ex-COAS of betraying him and lamented that giving an extension to the retired general was his “biggest mistake”.

Gen Bajwa retired last month after serving as the army chief for six years — 2016-2022 — after receiving an extension in 2019 for three years during Khan’s government.