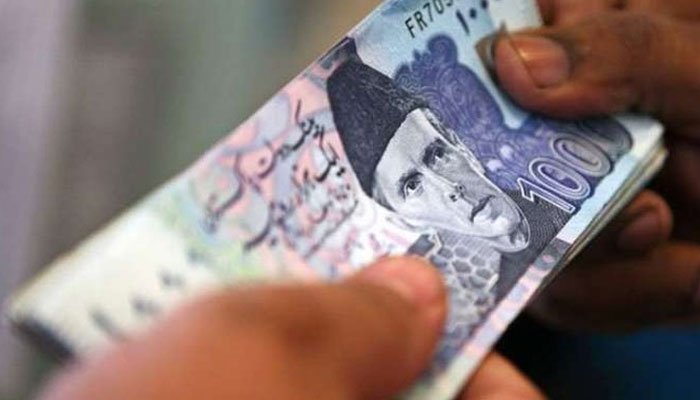 Rupee further weakens against US dollar in interbank market

KARACHI: The Pakistani rupee depreciated further by 0.07% against the US dollar in the interbank market on Friday and closed at Rs200.14 amid concerns  over the pace of its fall and a lack of support from the central bank.

According to the State Bank of Pakistan (SBP), the rupee, for the first time in the history of Pakistan, closed at Rs200 on Thursday.

In the open market, the rupee was selling at 202 against the greenback, rates released by the Forex Association of Pakistan showed. However, some dealers are selling it at an even higher rate of 203-205 in the market.

Economic experts and financial pundits link the depreciation of the currency to the bailout talks with the International Monetary Fund (IMF), which are underway in Doha, apart from an intensifying balance of payment crisis, increasing political uncertainty and eroding investor confidence in the country’s economy.

The government is seeking to increase the size and duration of the loan programme along with the immediate release of the $1 billion tranche as it is in dire need of external financing amid depletion in the foreign exchange reserves. The forex reserves of the central bank declined to $10.3 billion during the week ending May 6 which can cover less than two months of imports.

It is worth mentioning that the country follows a market-based exchange rate where the currency moves are determined by the market forces of demand and supply.

The domestic currency has maintained the trend of making and breaking records for the ninth consecutive working day as it cumulatively lost nearly 8% or Rs15 in the last 11 sessions.

Earlier, speaking to Geo.tv, former finance minister Dr Hafiz Pasha had said the revival of the IMF programme has become a necessity for Pakistan in order to curb dollar flight.

“In the next few days, rupee-dollar parity depends on how talks with the Fund mission unfold,” he had said, reiterating that if Pakistan’s delegation successfully convinces the IMF to revive the stalled multibillion-dollar programme then the local currency will stabilise.

Pasha, however, emphasised that if Pakistan moves towards fresh polls this will “negatively” impact the local currency.

“Call for fresh elections would create uncertainty in the short run,” he had said, adding that Pakistan would also have to stall the IMF programme because the caretaker government does not have enough powers to involve in discussion with the Fund.

“It is important for the new government to present a proper federal budget for the fiscal year 2022-23 which is the second important factor that would play role in stabilising rupee-dollar parity,” he concluded.

Taking notice of the dollar flight and other economic woes, the federal government has devised an economic plan in a bid to take the country out of the financial turmoil and, “for the first time”, a complete ban has been imposed on luxury and non-essential items.

“This is an emergency situation and Pakistanis will have to make sacrifices under the economic plan. This will have a quick impact on foreign reserves. The ban will have an impact of $6 billion,” Information Minister Marriyum Aurangzeb had said during a press conference.

Aurangzeb has mentioned that the government’s focus was to reduce imports and, therefore, it was about to introduce an export-oriented policy, which would benefit the local industry and producers.