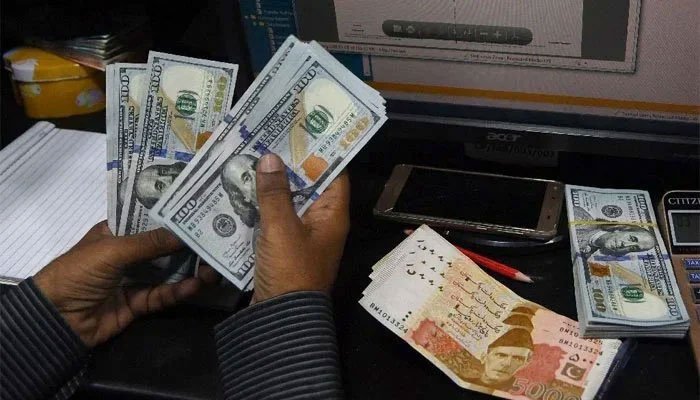 Rupee continues to sink, shed 0.39% against US dollar in interbank

KARACHI: The Pakistani rupee on Monday maintained its downward streak and dropped to an all-time low of Rs200.93 in the interbank market.

According to the data released by the central bank  the local unit further plummeted by 0.39% against the greenback compared to its last close of 200.14.

The dollar had hit a double century and busted all previous records to breach the Rs200-threshold in the interbank market on Thursday.

In the open market, the rupee was sold at 202.25 against the greenback, rates released by the Forex Association of Pakistan showed. However, some dealers are selling it at an even higher rate in the market.

The local currency remained under pressure as the political uncertainty heightened after the former prime minister Imran Khan announced the date for a long march.

“If Imran Khan starts a long march towards Islamabad, it will teeter the country into chaos,” a currency dealer said. “This would further erode investor confidence in the country’s economy and currency.”

Moreover, the market remained sceptical about whether the government will successfully complete the negotiations with the International Monetary Fund (IMF) to revive a $6 billion loan programme or not as it hasn’t announced the removal of fuel and power subsidies.

Last week, the coalition government had imposed a ban on the import of luxury and non-essential items. This decision was taken in the light of recent dollar slippage, rising current account deficit and decline in the country’s foreign exchange reserves.

The government said these measures would have a positive impact on the current account deficit and will help in controlling the slippage of the rupee against the dollar.

However, analysts believe that these measures are insufficient and might lead to a further increase in smuggling via western borders.