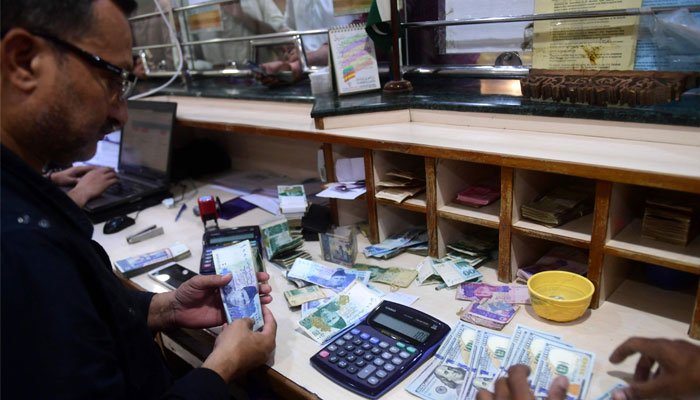 Rupee climbs over 200-mark against US dollar in open market

KARACHI: The Pakistani rupee surpassed the important threshold of 200  in the open market against the US dollar with a loss of Rs2.5 on Wednesday.

Meanwhile, in the interbank market, the local currency continued to be on slippery ground, and with a fresh decline of Rs2.65, it plunged to yet another historic low of Rs198.39 against the greenback, despite suspected intervention by the central bank.

The rupee was trading at a new all-time low at Rs199 at 2:46 pm against the greenback during intraday trade, compared to Tuesday’s close of Rs195.74.

The recent decline came as Pakistan resumes talks with the International Monetary Fund (IMF) in Doha today for the revival of the stalled multibillion-dollar loan programme.

Investors are concerned as there is speculation in the market that the IMF may not agree to resume the loan programme following the government’s reluctance to implement the prerequisite conditions.

The market is also waiting for the outcome of the meetings held between Prime Minister Shehbaz Sharif and his coalition partners.

Analysts believe the rupee is gradually heading towards exceeding the Rs200-mark in the interbank market in the days to come if the government doesn’t take immediate action to bring economic and political stability to the country.

A day earlier, speaking to Geo.tv, AA Commodities Director Adnan Agar said: “The situation is likely to remain uncertain for the local currency.”

“If the government decides to remove subsidies on petroleum products, the rupee will bounce back,” he had said, adding that the local unit will remain within the range of 180-185.

Agar, however, had mentioned that if the government decided to dissolve the assembly and move towards an early election, the situation for the already tumbling currency market would deteriorate.

Regarding the IMF talks, the analyst said that if the government announces early polls, the IMF programme will be stalled or if the government decided to maintain the subsidy on petroleum products against the IMF conditions, the currency will slump further.

Agar maintained that even if the currency appreciates in the near run on the back of the decision taken by the coalition government, by the end of the fiscal year 2022-23 the rupee will slowly and gradually crawl back to the current levels because of the widening current account deficit, which is one of the major issues of Pakistan.

Sharing similar views, other currency dealers said that the government’s reluctance to withdraw the subsidies as agreed with the IMF has worsened the situation.

Since the PTI-led government was ousted through a vote of no-confidence on April 10, the dollar was valued at Rs182.93. From then onwards, the rupee has lost Rs15.46 or 8.45% of its value.