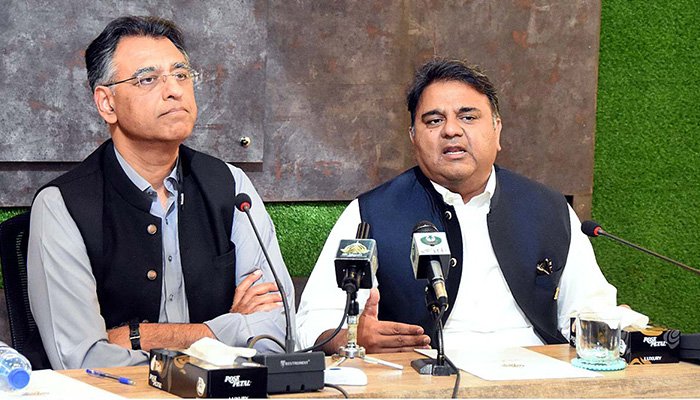 
The PTI’s top-tier leadership backed its chairman Imran Khan after the Islamabad High Court (IHC) decided to indict the former prime minister after two weeks in a contempt of court case.

In response, PTI’s leaders started a Twitter trend #IStandWithImranKhan and stated that their party would fight the case as the former prime minister had struggled for the rule of law.

PTI Secretary-General Asad Umar said that in Khan’s 26-year political career, an important aspect was that he always wanted an independent judiciary.

“InshaAllah, a decision based on justice will ensure Khan’s victory,” he said.

PTI’s spokesperson on legal matters, Maleeka Bokhari, said that Hamid Khan — who was the ex-PM’s lawyer in the case — represented the PTI chairman “in a very apt manner”.

“Imran Khan remains the only leader who has consistently struggled for rules of law. We will fight this case and hope justice will prevail,” the PTI leader said.

PTI Senior Vice President Shireen Mazari said that now, more than ever, justice must not only be done but seen to be done.

“So where is action against these people targeting the judiciary, some most violently?” the PTI leader said while sharing a video of PML-N leaders — including Maryam Nawaz and Marriyum Aurangzeb.

The IHC earlier today decided to indict the PTI chairman on September 22 after the former prime minister did not submit an unconditional apology.

The court had last month taken notice of the former prime minister’s speech at a public rally, where he allegedly threatened judge Chaudhry for extending the remand of Gill.

At the last hearing, the IHC chief justice had asked Khan to ensure that he submits a “well-considered” response in seven days to the show-cause notice, otherwise the court would have its way.

In his first response to the IHC’s show-cause notice in the case, the PTI chairman did not apologise, offering, however, to withdraw his remarks “if they were inappropriate.”

In his latest response, which was a 19-page-long document, the PTI chairman seemingly opted to tell the court that it should discharge the notice based on his explanation and follow the Islamic principles of forgiveness.

However, in both responses, the PTI chairman did not offer an unconditional apology, which ultimately led to the court taking the decision despite amici curiae suggesting that the former prime minister be forgiven.