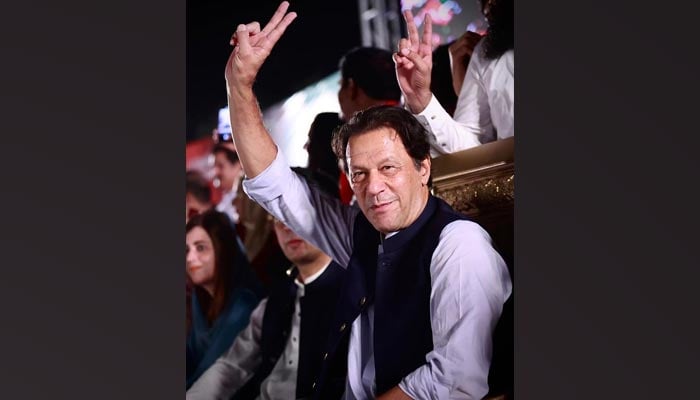 
Pakistan Tehreek-e-Insaf (PTI) Monday announced ‘Election Karao Mulk Bachao’ campaign across the country to kick start from December 7 in order to pile up pressure on the coalition government for early elections.

The development came during a meeting of PTI’s lawmakers and office-bearers under the chair of the party chairman Imran Khan.

According to the plan, under the first phase of the nationwide drive mass rallies and public gatherings will be held in Lahore from December 7 to 17.

The campaign will kick start with a rally in Hammad Azhar’s constituency in the provincial capital city on December 7.

The meeting also deliberated over the dissolution of the provincial assemblies in Punjab and Khyber Pakhtunkhwa (KP).

During the rallies, the coalition government will be criticised for rising inflation, human rights violations and worsening economic situation, the meeting also decided.

On December 4, Khan shared his willingness to halt the dissolution of the Punjab and KP assemblies if the incumbent government agrees to conduct elections by the end of March next year.

“If they are ready for elections by the end of March, then we won’t dissolve the assemblies. Otherwise, we want to conduct polls by dissolving the KP and Punjab assemblies,” Khan said in an interview with a private news channel.

He added that his party won’t agree on a date after March and assemblies will be dissolved this month [December] if the government disagrees.

“How long will they take to decide? They either have to say yes or no. We have already decided,” the former premier said underlining his conditional stance on talks with the government on the election date.

“If they [government] want, we can talk to them about what date the elections can be held. There is no way elections can take place after the budget,” he said, adding that the government will take the country down this way.

“Do they want polls to take place in 66% of the country and then conduct general elections?” Khan questioned.

Imran’s assassination accusation against Zardari may lead to bloodshed: Asif

Transpersons to get Rs7,000 in aid