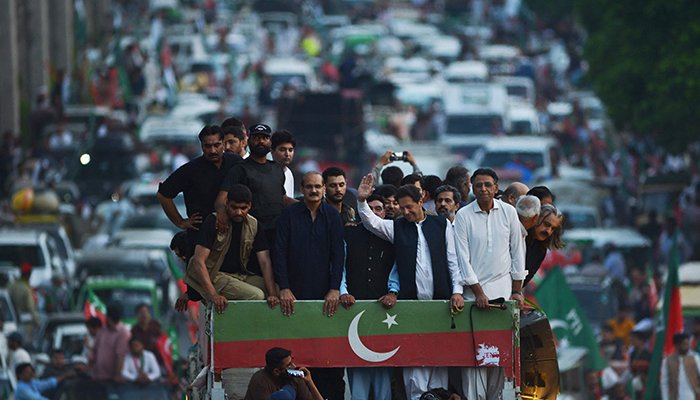 
ISLAMABAD: The PTI announced Monday it would hold its power show in Punjab’s capital, Lahore, on the eve of Independence Day — August 13 — as the party’s chairman, Imran Khan, rallies supporters against the government.

Khan was ousted from the prime minister’s office through a no-confidence motion in April, and since then, he has been holding large rallies across the country.

The PTI chairman claims the United States and the then-opposition conspired to oust his party from power. However, both deny the allegation.

In a statement issued today on Twitter, the PTI said: “On the night between August 13-14, a huge Independence Day celebration will be observed at the Hockey Stadium.

The tweet mentioned that PTI’s chairman would attend the event and address participants.

This development comes after the government allowed PTI to hold the jalsa, but declined the TLP’s request to hold a rally at the Parade Ground.

Addressing a press conference earlier in the day, Interior Minister Rana Sanaullah Khan said Khan announced that he would hold a protest in Islamabad on August 13 in which he would give the government a one-month ultimatum to hold the general election.

Taking a jibe at Khan, the minister said that he should first remove Chief Election Commissioner Sikandar Sultan Raja from office upon whom he had expressed “no trust”.

When a new election commissioner is appointed, then the PTI chairman should demand fresh elections, Sanaullah added.

The minister asserted that holding peaceful protests was the right of every political party and they were allowed to hold public gatherings, but warned that those who tried taking the law into their hands will be dealt with an iron hand.