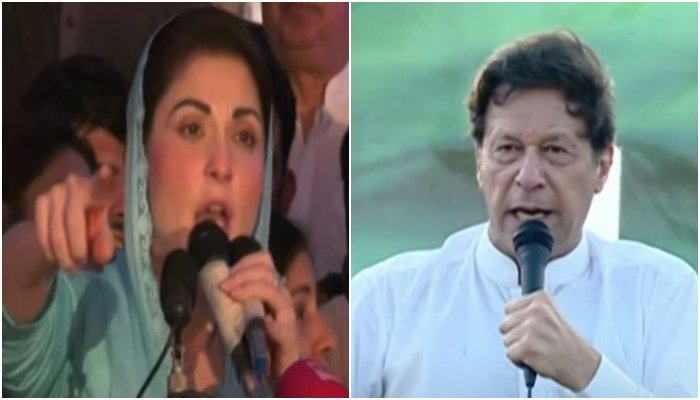 PTI Chairman Imran Khan and PML-N Vice President Maryam Nawaz have, over the last few weeks, addressed many public gatherings in different parts of Punjab ahead of the by-elections in the province that are set to take place on July 17.

The Election Commission of Pakistan (ECP) had unseated the 25 dissident members of the PTI who voted for Chief Minister Hamza Shahbaz against their party lines when electing Punjab’s chief minister.

In a bid to win his follower’s support, PTI Chairman Imran Khan Friday addressed his last election jalsas in Faisalabad and Lahore, claiming that his party was going to win all the 20 constituencies.

During the public gathering, the former prime minister alleged that the PML-N was preparing to rig the elections because the party knows that PTI will clean sweep all the constituencies.

“They will break all the records of rigging the elections,” he said while urging his supporters to guard the polling stations on the day of the elections.

Khan said that his party will win against Hamza despite his party’s efforts to rig the elections. “We will celebrate Hamza Shahbaz’s loss,” he added.

Taking a dig at the incumbent government, Khan said the United States imposed these “thieves” upon us so that it could use and discard them like “tissue papers”.

“America does not want Pakistan’s betterment, it only wants to enslave our nation,” said the ex-premier, adding that he does not want enmity with any nation but to be treated as equals.

The PTI chairman vowed to fight against the incumbent government, saying that he will move the Supreme Court. “The Sharif and Zardari families have never done anything sincere during their lives. They have been begging for the last 32 years now,” said Khan.

He said that PML-N Vice-President Maryam Nawaz was the owner of expensive properties in London, adding that “it is a pity that our justice system cannot hold these thieves accountable.”

Highlighting the efforts by the PTI government, Khan said that his party did not increase the prices of commodities in the country despite International Monetary Fund (IMF’s) pressure. “We provided health insurance, loans, and the industrial sector was developing during our tenure,” added the former PM.

On the other hand, Maryam addressed a public gathering in Lahore, saying that she was “proudly campaigning for her brother Hamza as the Chief Minister of Punjab.”

Praising CM Hamza for his efforts, Maryam said that the chief minister cleaned the whole province within 24 hours after Eid ul Adha. “This year, the government did not only clean Lahore, but the whole province,” she added.

During her address at Lahore’s PP-168 constituency, the PML-N leader said that “good times were ahead and the difficult times have passed.”

“Lahore belongs to party supremo Nawaz Sharif and will always belong to him and if the PTI’s incompetent government had remained in power for another year, it would have ruined the whole city,” said Maryam.

She went on to say that those eyeing Lahore with bad intentions will lose on July 17. “This is not a war between PTI and PML-N, this is the war for Punjab and Lahore’s development,” added the PML-N vice president.

Talking about the oil prices, Maryam said that the prices will further decrease if they fall in the global market.