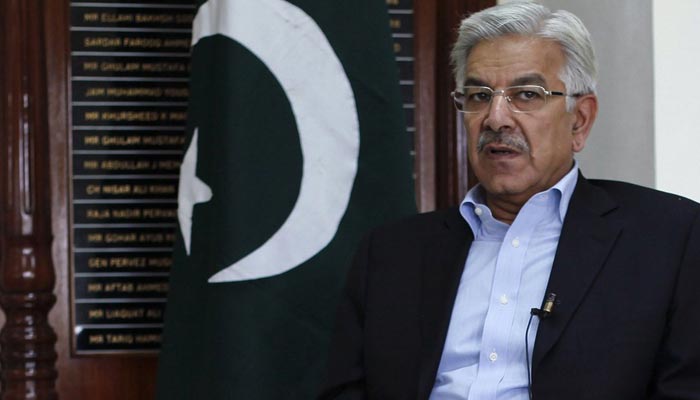 Federal Minister for Defence Affairs Khawaja Asif Sunday claimed the PTI has apologised to the United States’ Assistant Secretary for South and Central Asian Affairs Donald Lu for levelling allegations against him of being involved in former prime minister Imran Khan’s ouster.

Speaking during Geo News programme “Naya Pakistan”, the defence minister said: “We [the coalition government] have obtained all records regarding PTI’s apology to Lu. Evidence has been received regarding PTI leaders’ meeting with the US government where they tendered an apology.”

He went on to say that while Khan was chanting slogans against the US during his public gatherings; he is now “apologising for his mistakes”.

Asif further added that the PTI chairman has sent a message to the US that he wants to “fix things and his relationship with the superpower”.

‘PTI can file petition to get leaked audio verified’

Commenting on the leaked audio of former first lady Bushra Bibi — in which she could be heard instructing PTI’s Dr Arsalan Khalid to run traitor trends on social media — Asif said that the PTI can file a petition in the court to get the leaked audio verified through forensics from a third party.

The defence minister said that if they [PTI] claim the audio of former first lady Bushra Bibi was manipulated, they can get it tested through forensics.

Asif said that Khan is attacking institutions because he has lost power; however, “he should be ashamed of levelling allegations against the institutions.”

“In the past, we too criticised the institutions but never levelled allegations,” he said, adding that till the time Khan was in power, he liked all these things which he has been commenting against.

Earlier today, speaking to journalists, the minister said the former prime minister was fulfilling India’s agenda as his “only mission was to weaken Pakistan’s nuclear programme”.

The PTI chairman was creating divisions in the defence establishment, he said.

“He [Khan] can neither be loyal to the soil nor anybody else as he isn’t loyal to his own blood,” Asif said, adding that he has had the shock of his life after the alleged audio of his wife, Bushra Bibi, surfaced.