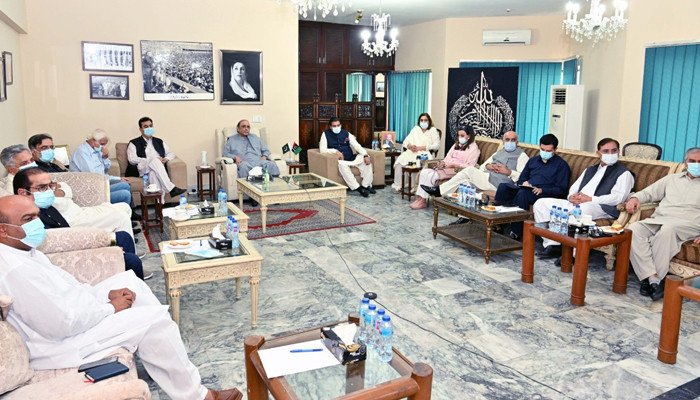 ISLAMABAD: PPP Saturday stressed taking decisions related to terrorism issues in the parliament, a statement from the party said.

The meeting came after PPP served a show-cause notice to its MNA from the erstwhile federally administered tribal areas — Sajid Hussain Turi — for attending peace talks with the banned TTP without informing the party or parliament, according to The News.

In today’s high-level meeting held at the Zardari House in Islamabad, the participants discussed the issue of terrorism in-depth, particularly in light of recent developments in Afghanistan with the TTA and the TTP, a statement from the party said.

A senior PPP leader, on the condition of anonymity, told the publication that there appeared to be wheels within wheels in the state apparatus and that it was extremely risky for national security to conduct such a serious exercise without informing the parliament, and political parties, and other stakeholders.

Following this, the PPP’s high-level huddle decided to reach out to allied parties to create consensus on the way forward — during the “hybrid meeting” chaired by PPP Co-chairman Asif Ali Zardari, with PPP Chairman Bilawal Bhutto-Zardari in attendance via video link.

In a statement later, Foreign Minister and party chairman Bilawal reiterated that the PPP believes that “all decisions must be taken by parliament”.

The negotiations in Kabul between a Pakistani grand jirga and the banned TTP had advanced significantly earlier this month as TTP declared an indefinite ceasefire, according to Geo News.

Last year, the two sides had agreed to a ceasefire but talks failed. The talks, also held inside Afghanistan, broke down due to a disagreement over the release of TTP prisoners held by Pakistan, according to local media.