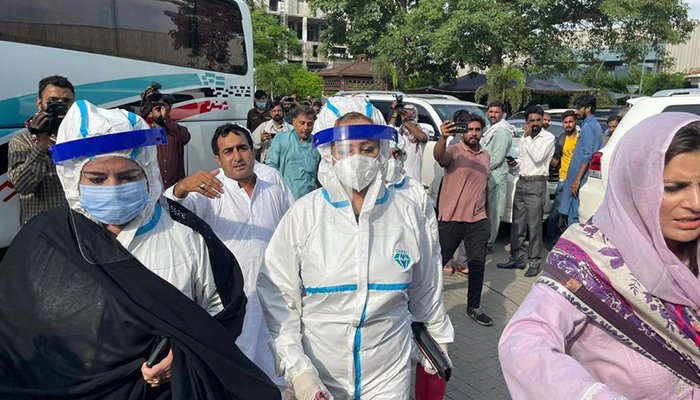 PML-N leaders Uzma Qadri and Saba Sadiq arrived at the Punjab Assembly wearing coronavirus protective kits to participate in the crucial session for the election of the chief minister.

In line with the orders of the Lahore High Court, voting is to be held today. Therefore, despite testing positive for COVID-19, Uzma arrived at the assembly to cast vote for PML-N’s Hamza Shahbaz.

In a video that recently surfaced on social media, Uzma and Saba can be seen wearing Personal protective equipment (PPE) kits. Despite their illnesses, both the candidates arrived as each vote is important to ensure Shahbaz’s victory.

It should be noted that after the changed situation in the province due to the results of the by-polls, PML-Q’s Pervez Elahi is now most likely to replace Hamza as the new chief minister of the province.

Almost all the turncoats who joined the PML-N and voted for Hamza lost to the PTI candidates in Sunday’s Punjab by-elections. The PTI grabbed 15 of the total 20 seats in the Punjab by-polls, while PML-N won four seats and the remaining one seat went to an independent candidate.