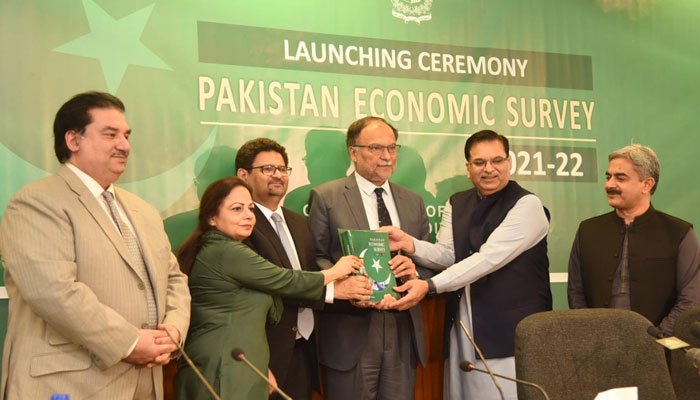 ISLAMABAD: Finance Minister Miftah Ismail on Thursday unveiled the Economic Survey of Pakistan 2021-22, a pre-budget document, showing growth hitting 6% against the target of 4.8% in the outgoing fiscal year.

Miftah highlighted the performance and targets achieved or missed during the outgoing fiscal year — when the Imran Khan-led government was in power for the first nine months — that started on July 1, 2021, and will end on June 30, 2022.

The government achieved the most important economic target — GDP growth — and hence, it was less surprising that other goals were achieved as well.

“The situation in Pakistan has remained the same — whenever the country records growth it, unfortunately, gets into the crisis of current deficit,” said Miftah.

“The same has happened this time as well, the recent 5.97% growth recorded during the outgoing fiscal year 2021-22, according to new estimates, has pushed Pakistan towards the balance of payments and current account deficit crisis,” the finance minister lamented.

He further highlighted imports have increased by 48% as compared to the last fiscal year, while the exports also moved up. But noted that the trade deficit stood at $45 billion.

Miftah said that years before, the exports were around half of the imports. However, the export-to-import ratio stands at 40:60 now, he said, adding that Pakistan could only finance 40% of its imports through exports and for the rest, it had to rely on remittances or loans — which makes the country stuck in a balance of payment crisis.

“We also need inclusive growth. We have always facilitated the elite so they can boost the industry and benefit the economy. This is one strategy, but when we give privileges to the elite, then our import basket increases,” he said.

A rich person spends a lot on imported items as compared to a low-income person, he said, adding that the government should financially empower the low-income groups to boost local production.

“If we do this, then maybe our domestic and agriculture production would increase, but it will not move up our import bill. This growth will be inclusive as well as sustainable,” he said.

The finance minister added that since the energy prices are too high in Pakistan, therefore, the local industry is “uncompetitive and also shuts down at times”.

Miftah said the gas supply for all industries has resumed after being shut for some time, noting that the supply to industries would not have been stopped had the PTI government entered long-term agreements.

The previous government did not make long-term plans, forcing Pakistan to buy energy and oil at expensive rates, which is worsening the economy of the country.

“And this is not PML-N, JUI-F, PPP, or the coalition government’s economy whose economic situation is worsening; it is the state of Pakistan that is seeing an economic turmoil,” he said.

The finance minister, while talking about the foreign direct investment (FDI), said it was around $2 billion in 2017-2018, but it stood at around $1.25 billion in the first nine months of the outgoing fiscal year.

Miftah said the trade and current account deficits have increased as compared to 2017-18 — the fiscal year when PML-N’s government ended — as an “incompetent” ruler was imposed on Pakistan.

Miftah said although coronavirus was once in a lifetime pandemic, the government missed historic opportunities. “After COVID, oil and gas were at record-low rates, which the PTI government missed.”

He noted that although several lives were lost due to the pandemic, the country did not face much of a loss on the economic front as the G20 deferred the loan repayment of more than $4 billion and International Monetary (IMF) gave an additional $1.4 billion to Pakistan.

“The previous government did not consolidate it and could capitalise on it,” the finance minister said, slamming the PTI for reducing the agricultural yield as Pakistan now has to import wheat from countries, that it would export in the pre-PTI era.

Miftah stressed that since Pakistan is a nuclear country, its export-to-GDP rate should be 15%. “The problem in Pakistan is not that our import is a lot, but the issue lies in our exports being less,” he said.

The finance minister said the PTI government took “historic” loans during its tenure. Miftah added the government would be needing $3,100 billion for debt servicing this year and the $3,900 plus billion next year.

For his part, Minister for Planning, Development, and Special Initiatives Ahsan Iqbal said the PTI government had rebased the economy, therefore, the latest numbers did not represent the “true picture”.

The planning minister said his sector, development, has taken the biggest hit in this economic survey as public investment had gone down, which ultimately shrunk private investment.

Iqbal said PTI decreased the development budget gradually and when the coalition government came into power, it was taken down to Rs550 billion.

“This was a huge contrast between the budget that we last presented. We had aligned ‘two Ds’ — the defence and development budgets were Rs1,000 billion,” Iqbal said.

The federal minister said the defence budget was not slashed for development, but record taxes were collected to meet the demands of both sectors.

Iqbal added that Pakistan’s future depends on a strong defence as well as development. He added that it was important to invest in education and creates avenues of employment for youth.

“If we do not do this, then a similar incident will happen like the one which took place at Karachi University, where a woman, who was studying doing her MPhil, blew herself up. The people facing poverty tend to move towards extremism,” he said.

The planning minister recalled that during the PML-N’s last tenure, the country was moving towards “vision 2025” when all of a sudden, we took a U-turn to “Naya Pakistan”.

Iqbal said the coalition government was trying to bring the country back on track in terms of economic prosperity, but “at a price” — the revocation of subsidies.

He added that when the government was formed, it took one month to end the subsidies as it was trying to look for ways to refrain from shifting the burden on the masses.

Moving on, Iqbal said the development had stood at “0%” during PTI’s tenure, and the current government wanted to revive the economy in its quest to invest in this sector.

Pakistan is behind Bangladesh in every sector despite Dhaka gaining independence 25 years after Islamabad, Iqbal said, noting that it was time the nation thinks about development seriously.

Iqbal said this is why Prime Minister Shehbaz Sharif is stressing over the need for a “national charter of the economy”.

He added that the Higher Education of Pakistan’s (HEC) development budget was being increased by 67% and the China-Pakistan Economic Corridor (CPEC) was also being revived.