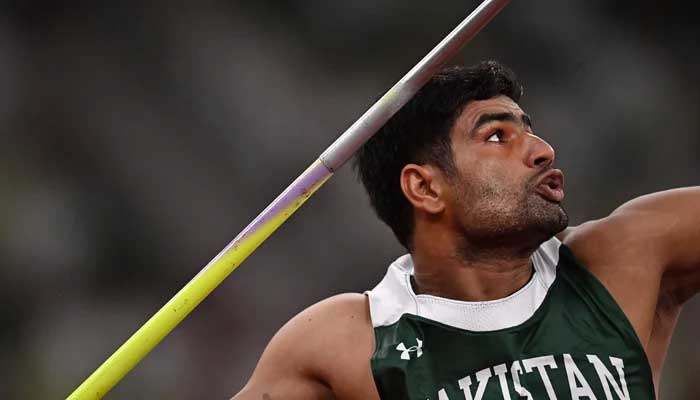 
BIRMINGHAM: With an eye to win his maiden Commonwealth Games medal, Pakistan’s star athlete Arshad Nadeem will contest in the men’s javelin throw final at the Alexander Stadium today (Sunday).

After the Tokyo Olympics gold medallist and the recently-held World Championship silver medallist Neeraj Chopra of India decided to stay away from the quadrennial event due to a groin injury, Arshad has the perfect chance to finish at the podium in Birmingham.

Following a fifth-place finish in last year’s Tokyo Olympics, Arshad also ended fifth in the recently-held World Championship in the US with an 86.16 metre throw. This was also his third personal best throw, his best being 86.38m which had come in Iran and 86.29m which he pulled off in the 2019 Nepal South Asian Games.

The two-time world champion Anderson Peters is here in Birmingham and he is in great nick. He strongly defended his world title in the US recently with a monstrous throw of 90.54 metre.

The 2012 London Olympics gold medalist Keshorn Walcott of Trinidad and Tobago has also confirmed entry and it will be seen how he clicks. However, he lagged behind in the World Championship in the US. He failed to qualify for the finals as he just managed a throw of 78.87m. Nevertheless he might be tricky, having a huge experience. Kishorn has to his credit a bronze in the 2016 Rio Olympics and silver in the 2014 Glasgow Commonwealth Games.

And it will be interesting to see how the trio deliver in Birmingham. Arshad is confident to pull off his best in the quadrennial event.

“Yes, InshaAllah I will do my best,” Arshad told The News.

“I am in top shape. Yes, I carry an elbow injury and am playing with that. In the US, too, it troubled me as I felt pain during the World Championship but I am handling it nicely.

In the US Dr Ali Bajwa was there and he treated me well. Here too, most probably, he will be with me as his services, I think, have been hired for a couple of days,” he said.

Asked whether he will compete with Peters, who is the world’s best, Arshad said he would try to pull off his best.

“I don’t compete with anyone. I compete with myself. I will try to extract my personal best. And when I will be able to do that then I will have a strong podium finish chance,” said the Asian Games bronze medallist.

He said training in Birmingham had been fairly good. “Yes, a few good sessions were held here as the weather here is too ideal and supportive,” Arshad said.

In the US too, he was without a coach and here again he will be playing without a coach. In the US his South African coach Terseus Liebenberg, who had trained Arshad in Johannesburg, could not come to the US due to health reasons.

“There is no coach with me,” Arshad said.

After this event, Arshad’s next target is the Islamic Games which are slated to be held in Konya, Turkey, from August 9-18.