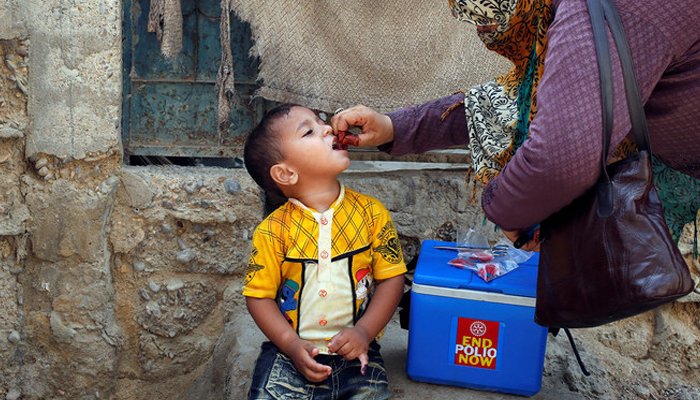 ISLAMABAD: Pakistan recorded a new case of poliovirus from North Waziristan’s Mir Ali Union Council (UC) 7 after health authorities diagnosed an eight-month-old boy with it, The News reported on Friday.

Confirming the report, the health ministry’s spokesperson said the total number of cases in Mir Ali has reached eight. The country-wide toll for 2022 has risen to 11 after the new case.

In response, Federal Health Minister Abdul Qadir Patel sought cooperation from the people to eliminate the poliovirus and asked them to ensure the administration of anti-polio drops to their children.

The emergency committee of the World Health Organisation (WHO) on the international spread of poliovirus has declared community resistance with refusals to vaccination, including vaccination boycotts and fake finger-marking without vaccination, lack of female frontline workers, high turnover of frontline workers, weak health infrastructure, and weak service delivery as major factors that caused back-to-back emergence of polio cases in North Waziristan.

The committee meeting, which was convened by WHO Director-General Dr Tedros Adhanom Ghebreyesus, expressed concern over the recent outbreak of WPV1 in North Waziristan.

Since the last emergency committee meeting in February 2022, Pakistan has reported 11 WPV1 cases from North Waziristan and two WPV1 positive environmental samples from the neighbouring district of Bannu.

“With the ongoing WPV1 circulation in South KP, the risk to the rest of Pakistan has escalated,” the emergency committee warned.

It said that the 10 WPV1 cases reported in 2022 had zero doses of routine immunisation, zero doses or under-immunised in SIAs, and belonged to families that had refused their immunisation.

The committee observed that another challenge in south KP was the sub-optimal routine immunisation.

The emergency committee commended the dedication of frontline health workers who continued to seek every child needing vaccination and also extended sympathy to the families of the 17 health workers who were killed in February 2022 in Takhar and Kunduz in Afghanistan.

The WHO body also observed that there had been continuous progress in the eradication of polio in the rest of Pakistan with no WPV1 detection during the last 11 months.

The last WPV1 case and positive environmental sample in the country outside of South KP were detected in January 2021 and July 2021, respectively.

It also warned that high-risk mobile populations in Pakistan such as migrants, nomads, and displaced populations, particularly Afghan refugees, represented a specific risk of international spread.