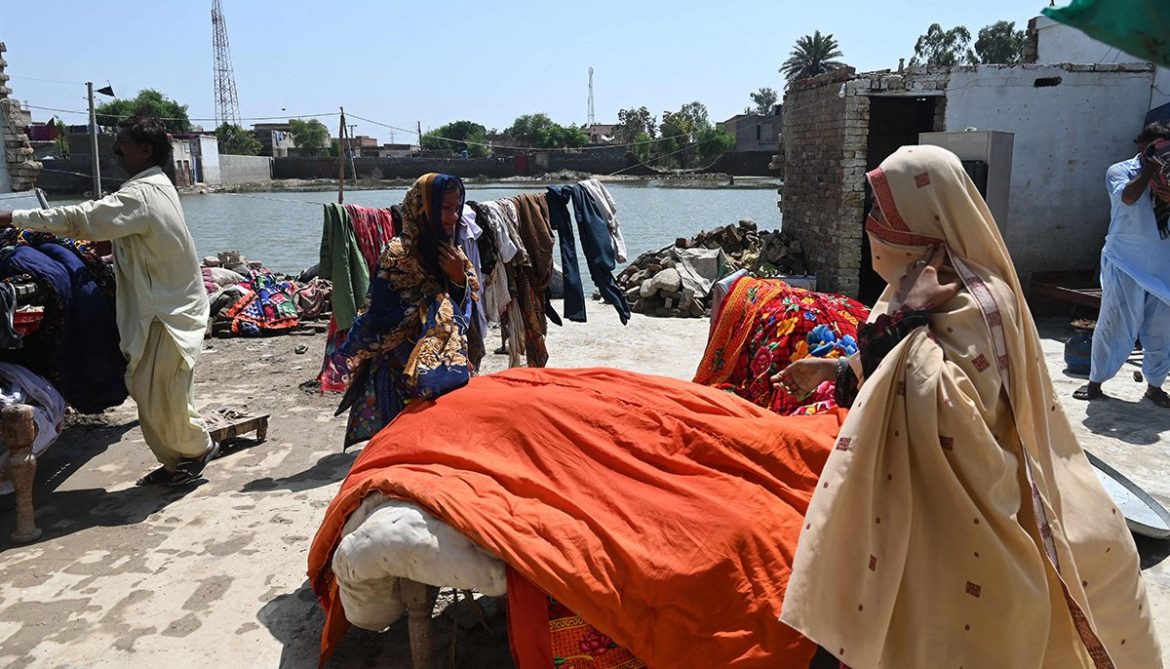 
FAZILPUR: Truck driver and father-of-seven Mureed Hussain was planning for his daughter’s October wedding when floodwater inundated his home, taking away the entire back wall and, with it, her hard-earned dowry.

“I had been collecting her dowry for almost three years,” Hussain told AFP from the courtyard of his four-room house, which he shares with his brother’s family.

“I would provide for the house and also spend a little on her dowry.”

Record monsoon rains have caused devastating floods across Pakistan since June, killing more than 1,200 people and leaving almost a third of the country under water, affecting the lives of 33 million.

The hardest hit are the poor in rural parts of the country, who have seen their homes, belongings, life savings, and crops washed away.

Hussain’s village in Punjab province was badly affected, with floodwater destroying or damaging scores of buildings.

Also washed away are marriage plans for Hussain’s daughter, Nousheen.

Each month Hussain would put away a couple of thousand rupees for her dowry from the Rs17,000 salary ($80) he makes driving trucks.

It is customary for families in patriarchal Pakistan to provide extravagant dowries when a daughter is married.

In many areas, parents are expected to start saving up for their daughters’ dowries from the day they are born.

While demanding a large dowry is officially banned by law, it is still a practice observed by many.

The families of grooms frequently present the parents of their future daughter-in-law with an extensive list of demands — including furniture, household goods and clothing.

In the case of wealthy families, it can even include cars and homes.

Failing to come up with the goods is considered shameful, and the bride-to-be often faces ill-treatment by her in-laws if a decent dowry is not provided.

“I wanted to marry off my other two daughters after her and one remaining son,” Hussain said.

“I had thought I would be able to do it gradually.”

When the floods reached his home, Hussain fled with his wife and family to a nearby railway station on elevated land.

When the waters receded, Hussain trudged through mud two days ago and returned to his home with his wife and daughters.

“They started crying when they saw the damage,” he said.

His wife, Sughra Bibi, teared up again as she recalled her shock at the condition of the home — and her daughter’s dowry.

Over the years, Sughra had bought a custom-made bed set and dressing table, as well as a juicer, washing machine, iron, bedsheets, and quilts.

Everything was badly damaged by the floodwater.

“It’s blackened, so whoever sees it will say we have given her old things,” Sughra said.

With the wedding called off, Nousheen is putting on a brave face.

“It was supposed to be a happy time for my family, and I was very excited,” the 25-year-old told AFP.

“I have seen how difficult it was for my parents to put this dowry together for me. Now they have to do it all over again.”

“It’s such a big problem for us now,” father Hussain said.

“Should we rebuild our house, sow wheat or get our children married? All three things are so important for us.”