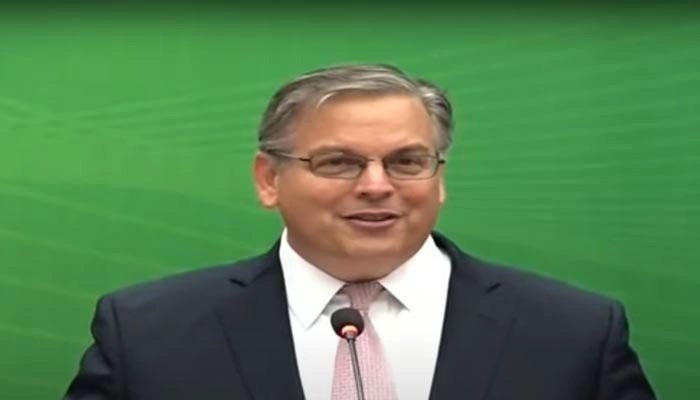 New US envoy wishes to strengthen ties with Pakistan

KARACHI: US Ambassador Donald Bloom on Tuesday expressed the desire for the US to strengthen ties with Pakistan amid Imran Khan’s narrative of a Washington-backed conspiracy to topple the former PTI government.

Speaking at a gong striking ceremony at Pakistan Stock Exchange (PSX) today, Bloom said that the year marks the completion of 75 years of diplomatic ties between the two countries.

“Our priority remains to strengthen ties between the two countries,” Bloom said, who assumed charge of his office recently. He is the first full-fledged US ambassador who has been designated to Pakistan’s federal capital in four years.

He appreciated US investment in the PSX, adding: “We want more American companies to come to Pakistan.”

Bloom said steps should be taken to improve trade relations between Pakistan and the US.

“American companies are producing the best products,” he said.

The US ambassador said he is “happy to visit the stock market”.

“I am in Karachi for the first time and it feels good to be here,” he said.

Meanwhile, in an interview with Daily Dawn, Ambassador Blome reaffirmed rejection of Khan’s “regime change” claim, saying Washington was “quite clear” about it.

“However, I believe that the best thing we can do in the future is to continue interacting at all levels with Pakistani society, as we have done for the past 75 years,” he said.

He went on to say that the involvement would not be restricted to government officials, but also include political leaders, corporate leaders, civil society, and the youth.

As part of this two-way dialogue, he said, he will “listen to and understand” what’s going on here, “transfer that understanding” to Washington, and share US “ideas and perspectives as plainly and transparently as possible” with audiences here.

He added that beyond the polarisation in internal politics over US relations, Islamabad’s new government has always been ready to revive bilateral ties.