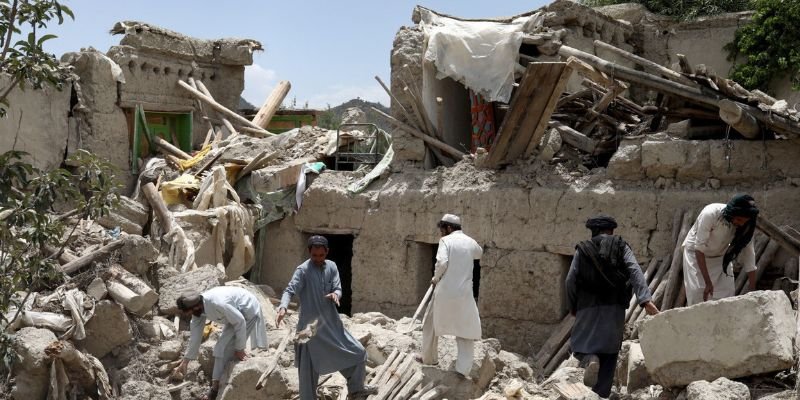 Months after earthquake in Afghanistan, trauma lingers on

Three months after the catastrophe, many women, men, and children are still undergoing treatment. However, these Afghans are also trying to confront their psychological wounds, post the earthquake.

Ata Muhammad Khan, a 19-year-old resident of Miami village in Gayan district, was asleep at his friend’s house when the earthquake struck. The tremors caused the roof to collapse on the entire family. Khan, although injured, tried to quickly climb out of the wreckage to head home.

On reaching his house, he was informed that his house too had caved in, taking with it the lives of his four siblings. Only his mother and a younger brother survived and are currently under treatment at a hospital in Peshawar.

“I lost my family and my home in just a few hours,” Khan told Geo.tv. “I am still afraid that it will happen again.”

Dr Setayesh Rahimi, a counsellor with the International Organisation for Migration, said that the 19-year-old boy is suffering from physical injuries as well as shock.

“His trauma was evident when I met him for the first time,” the doctor told Geo.tv. “He was suffering from psychological distress and had lost all his hope. He was also experiencing insomnia and showing somatic symptoms i.e., headache and body pain.”

Abdul Jalil, a resident of Gayan’s Shaha village, who did not want his real name to be published, has a similar story.

He lost his sister-in-law and nieces and nephews aged between 8-11 years. “We had not experienced an earthquake before,” he said, “At first we thought it was a bomb attack.”

His family spent an entire night under the open sky, looking for other members and pulling them out from under the rubble. “Everywhere there was dust and fog and cries and screams. It was a very bad situation,” recalls Jalil.

One of his family members lost his right hand, and the other suffered from multiple traumas after surviving over two hours under the debris. While Jalil, 50, is now living in a shelter home. An initial diagnosis by the International Medical Corps suggests that he is still struggling with emotional and psychological trauma.

The state of human security had already taken a huge toll on the Afghans and the earthquake has pushed them towards another crisis.

Post-traumatic stress disorders, anxiety and amnesia are common amongst the survivors.

Women are the most vulnerable and pre-existing inequalities in the society have aggravated the impact of the disaster, as cultural restrictions and lack of awareness among women have hindered their access to mental health services.

“Men don’t allow women to come to our counsellors,” Dr Rahimi explained, “We first have to speak with the men and communities to make them aware of the importance of mental health and how it affects their physical health too.”

Children are just as at risk. Those diagnosed by doctors post the earthquake are suffering from symptoms such as palpitation, body pain, digestive problems, low mood, loss of interest in playing, as well as nightmares.

“We need permanent psycho-social support in these communities,” the doctor added.

— Farooqui is a freelance reporter.