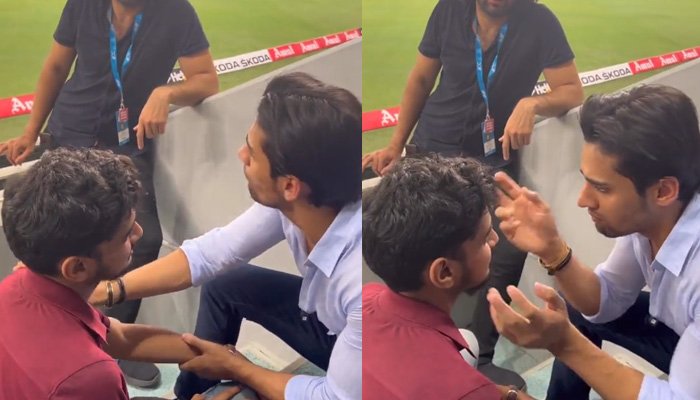 
DUBAI: British-Pakistani social media sensation Momin Saqib channelled his inner Shahrukh Khan to depict how Indian fans must be feeling after their team is nearing an exit in the Asia Cup, just days before the final.

India started their journey in the tournament on a positive note when they defeated Pakistan and later on went to beat Hong Kong as well. But when they met the Green Shirts again in the Super Four stage, they lost.

The same was their fate against Sri Lanka on Tuesday.

Saqib, who was at the stadium in Dubai, apparently met an Indian fan named “Anand”, and both the men shared their common sorrow about the Men In Blue’s possible exit and not facing Pakistan in the final.

This was something that fans from both sides enjoyed, as he humoured the Indians despite their team being pushed to a bad spot.

The people did not just enjoy this, but some also took jibes at the social media sensation, saying that Shahrukh wants to “meet him, alone”.

Sri Lanka’s six-wicket win over India in the Super Four stage of the Asia Cup has confirmed that there won’t be another Pakistan vs India game in Asia Cup 2022.

Arch-rivals Pakistan and India have met twice in this tournament in the UAE with both winning one match each and fans were hoping for them to meet again in the final on September 11, but it is no longer possible.

India’s two defeats in two games confirmed that there is no chance of a Pakistan vs India final, although India’s hopes for the tournament are still alive.

However, too much depends on ifs and buts.

Also, Sri Lanka’s position in the final is not confirmed.