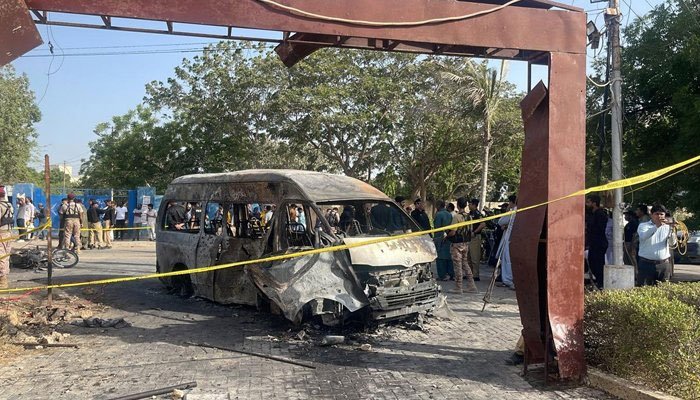 KARACHI: The Counter-Terrorism Department (CTD) produced on Tuesday the alleged mastermind of the Karachi University suicide bomb blast before an anti-terrorism court (ATC), after arresting him in a major breakthrough in the investigation.

The suspect had been arrested by the CTD with technical assistance from other law enforcement agencies (LEAs) on Monday.

They also said that he was involved in facilitating attacks on other Chinese citizens in Karachi.

Later, the ATC remanded the suspect in CTD police custody till July 16.

The suspect had been arrested during a raid near Nipa Chowrangi in Karachi’s Gulshan-e-Iqbal.

Sources privy to the matter said that the suspect had been called to Karachi to facilitate the attack on the Chinese teachers. He was in contact with Hebatan Bashir, the husband of the suicide bomber, and also met him.

The officials discussed the security of Chinese nationals working in the province and progress in the investigation of the suicide attack in Karachi University.

Sources further stated that Bakhsh has been trained for making explosive devices in Afghanistan and recieves funding from the country.

He is allegedly involved in the murder of two Chinese engineers near Gulbai and operated by remaining in touch with handlers through Telegram accounts.

In April, four people, including three Chinese nationals, were killed while four others sustained injuries in a car explosion on the premises of the University of Karachi.

According to the CTD, it was a suicide blast and was carried out by a burqa-clad woman, later identified as Shari Baloch.

The explosion occurred at 1:52pm in a van near the Confucius Institute — a Chinese language teaching centre at Karachi University.

The deceased Chinese nationals were identified as the director of the Confucius Institute Huang Guiping, Ding Mupeng, Chen Sai, and their Pakistani driver, Khalid.

Police sources said the van entered the premises through the Maskan gate of the university.