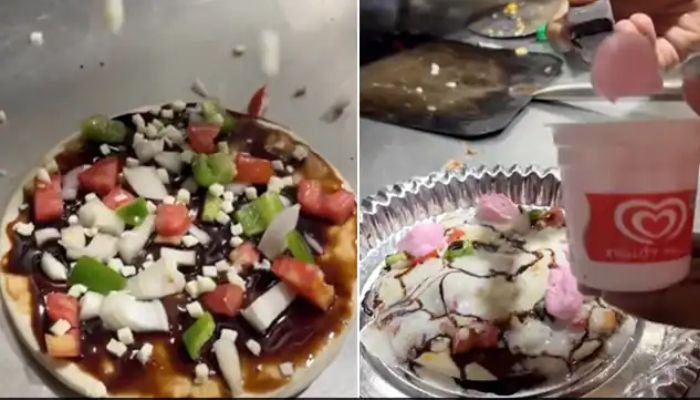 Experimenting with different combinations of food is not a new concept and chefs have done it over the years. Some of these combinations even divided the planet like pineapple and pizza. Others are outright rejected by people.

Social media users often post about their own experiments as well. While some are appreciated, others seem to be bizarre dishes. Ice cream pizza is an example of an unwelcome option.

A street vendor in an unknown location prepares a pizza by applying chocolate sauce. While here it seems like some sort of a doughnut-like recipe, the vendor then tops the pizza with bell peppers, vegetables, and even cheese. Even worse, he tops it with strawberry and vanilla ice cream.

When the man in the video tastes the dish, he ends up gagging.

Netizens are absolutely outraged and have called the food item “disgusting”. Some have suggested that the pizza should be thrown in the trash.

One user jokingly mentioned some famous pizza outlets in the post asking them to “must try” the recipe.

Many people commented “ew” on the post expressing their disappointment.