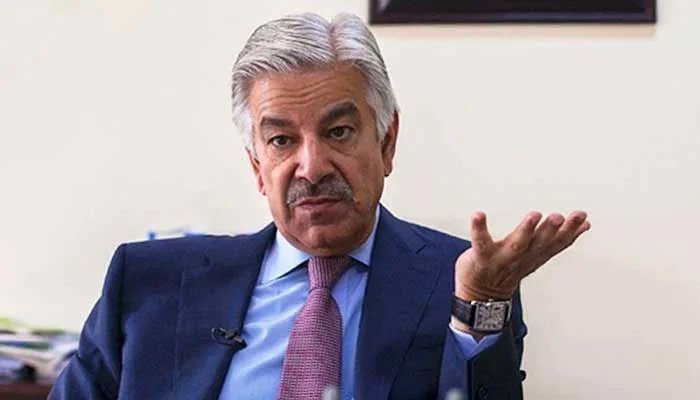 ISLAMABAD: Initiating action against Imran Khan and others under Article 6 of the Constitution is not a plan of the coalition federal government, but part of the Supreme Court’s verdict, says Defence Minister Khawaja Asif.

Justice Mazahar Alam Khan Miankhel, in an additional note of the SC’s verdict on Qasim Suri’s no-trust vote ruling, observed that President Arif Alvi, then PM Imran Khan, then NA speaker Asad Qaiser, ex-deputy speaker Suri, and former law minister Fawad Chaudhry had violated their authority, and left it up to lawmakers to decide whether to proceed with filing a reference under Article 6 or not.

“Whether these acts attract Article 6 of the Constitution (high treason) is also left open to be determined by the parliamentarians to ponder whether they should leave open the doors to such unconstitutional acts or take suitable measures to stop such a mess in future,” Justice Miankhel had observed.

Speaking on Geo News programme ‘Aaj Shahzeb Khanzada Ke Saath’, Asif said he would give his opinion on filing a reference against PTI’s top brass in Parliament.

He said all political parties must develop a consensus on the issue of why the situation had reached a point where politicians were mulling over the initiation of Article 6 proceedings against their counterparts.

Asif said PTI’s federal cabinet had approved Article 6 proceedings against him, and the then education minister Shafqat Mahmood had held a press conference against him in that regard.

But, the minister added, he would not like to pay them in the same coin.

He said Article 6 proceedings might not be initiated against them, but they would have to pay a price for the disgrace they brought to Parliament.

However, Asif said Khan has committed several wrongs with this country during his four years in government.

“He [Imran] provided his close people with every opportunity to commit corruption. He destroyed Pakistan during this period, and even today he wanted chaos in the country,” Asif commented.

Asif said it had always been his well-thought-out viewpoint that there should not be any interference in government affairs from any other institution, including establishment and judiciary.

“But Khan did not believe in it. He said time and again that the institutions should interfere but in his favour, and they should support him in running the government.”

“And when they did not support him, he hurled abuses at them […] he [Imran] had become so bitter that he has lost his mental equilibrium”.