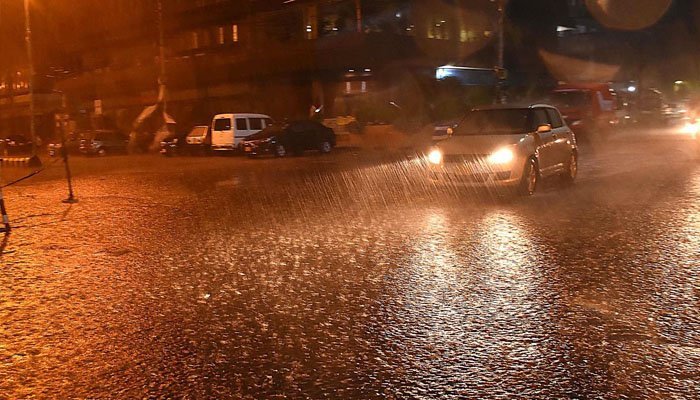 According to the reports, the areas that received rain overnight included Saddar, I I Chundrigar Road, Shahrah-e-Faisal and adjoining areas.

As per the Chief Meteorologist, Dr Sardar Sarfaraz, the weather is expected to remain partly cloudy in Karachi today and tomorrow, with a chance of light rain today morning and night.

Speaking to Geo News, he said, “The intensity of the first spell of monsoon will remain higher in Sindh, however, strong winds may blow, at speeds of up to 81km per hour.”

He further stated that if the monsoon system only lightly touches Karachi before passing by, 50-70mm rain may fall, but if the centre of the system passes through Karachi, more than 100mm of rain may fall.

Chances of heavy intermittent rainfall in Karachi from July 2 evening

A day earlier Chief Meteorologist at the Pakistan Meteorological Department, Dr Sardar Sarfaraz, said that there are chances for Karachi of receiving heavy intermittent rainfall starting on the evening or night of July 2.

He said that winds from Bay of Bengal and Arabian Sea entered Sialkot and Narowal last night and that today these winds will enter the upper part of the country with greater intensity.

Dr Sarfaraz said the city is at a grave risk of urban flooding.

Warning fishermen, he said there will be big tidal waves from July 3 to 5, so they should be careful venturing into the sea.