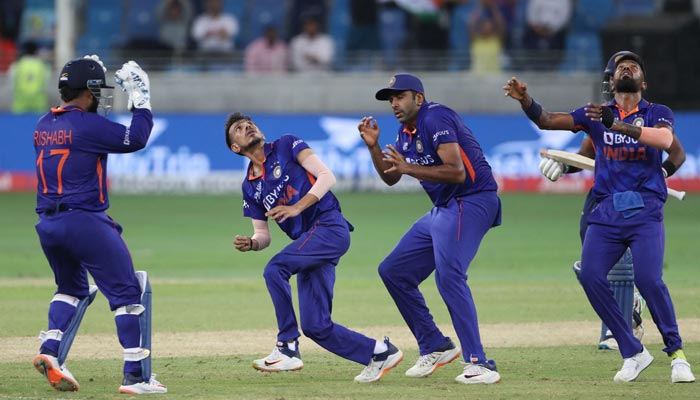 
DUBAI: Rohit Sharma’s India have been slammed for “chopping and changing” as they failed to make the final of the Asia Cup Twenty20 tournament with a game to go.

Pakistan’s win over Afghanistan on Wednesday knocked out India from the tournament, which was a warm-up for next month’s T20 World Cup.

India, who won the previous Asia Cup in 2018 and played in a 50-over format, came in as pre-tournament favourites but lost their first two Super Four matches to Pakistan and Sri Lanka.

“I think there was too much chopping and changing done after just one defeat,” former India wicketkeeper Parthiv Patel told the website cricbuzz.

“We lost against Pakistan and made three-four changes.”

India’s tinkering was not confined to the latter stages: Dinesh Karthik had been the wicketkeeper for India’s opening win against Pakistan, but Rishabh Pant was brought back behind the stumps for the next match.

Karthik, a hard-hitting batsman who specialises as a finisher in the short format, missed both Super Four matches as the left-handed Pant was retained in the middle-order.

“The consistency and the clarity of thought is so important, especially when you play this T20 format,” said Patel.

“Dinesh Karthik came in and he was left (out). Rishabh Pant came in and would be thinking whether I am a permanent member of the team or not.”

“Too much theory … is not a very good thing. What happens on the field is completely different,” Gavaskar told India Today.

“You have to have a Plan A, B and C, which is where the Indian team in this particular tournament has not had alternate plans.

“They seem to have been stymied when things started to unravel for them.

“Cricket is a game that changes in seconds, particularly the T20 format, and you’ve got to be ready for it.”

India can start to put things right when they play Afghanistan in a dead rubber Super Four Asia Cup match in Dubai on Thursday.

They will have home series against Australia and South Africa to cement their team plans before the T20 World Cup begins on October 16 in Australia.

India’s lone T20 World Cup success came at the inaugural tournament in 2007, and Gavaskar implored the team to “please see the areas where you can improve and plug those gaps”.

Read more: Are there any chances of another high-octane Pakistan-India clash?

India remain top of the T20 team rankings but have constantly faltered at global international tournaments with their last International Cricket Council title coming at the 2013 Champions Trophy.

But captain Rohit played down his team’s Asia Cup failure after they lost a close match to Sri Lanka on Tuesday.

“In tournaments like the World Cup, Asia Cup, here the challenge is you face different teams with different plans,” said Rohit.

“But we should not think about it too much. Yes, pressure is there, and our work is to make the boys realise how to deliver in pressure situations.”

“I am completely amazed to see how Mohammed Shami has been sidelined by the current Indian team management and the selectors,” Shastri said on Star Sports.

Injuries to pace spearhead Jasprit Bumrah and Harshal Patel made India turn to Avesh Khan, who fell sick in Dubai and was unavailable for selection in the last two matches.

“And a veteran like Shami should have certainly made it to the squad.”