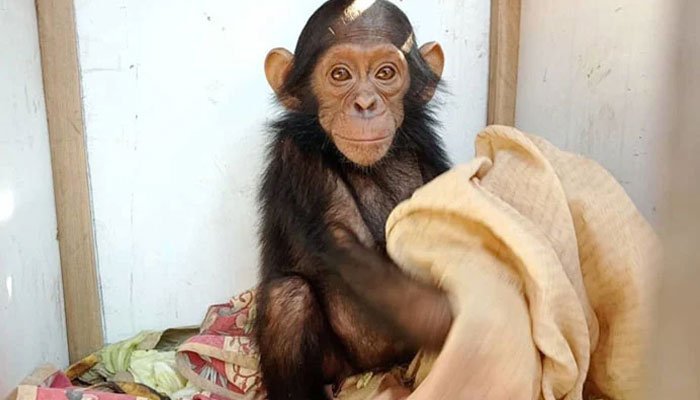 In a bizarre case of abduction, ransom demanded for chimpanzees


CONGO: Three baby chimpanzees have been kidnapped from an animal shelter in Congo, and a huge ransom has been demanded for their release.

For the first time in the history of the world, there has been a ransom demand for the kidnapping of animals, according to NDTV.

There were five baby chimpanzees in the animal shelter, of them three have been abducted while the other two were afraid of the kidnappers and managed to escape.

Sharing the details of the incident, the owner — per NDTV — said that he received a video and three audio messages from the abductors, in which they said: “They planned to kidnap my children but since they did not come back to the country, they took the chimpanzees.”

He further said that the kidnappers have threatened in their audio message that if the ransom is not paid, “they will harm the chimpanzees by drugging them”.

The owner added that it was “impossible for the shelter to pay such a huge amount” and there was “no guarantee that the baby chimpanzees would be returned safely even if the abductors are given the money.”

Raising his concern over the possibility of this act in future, he said that if they are met with their demands this time, they could do it in future as well.

“There are 23 animal shelters running across the country, if the kidnappers are given ransom, this will encourage other people to start kidnapping animals from the shelters, so we need to be very careful”, he said.

The media advisory by the Ministry of Environment said that the administration is continuing to investigate the case and they hope that the abductors will be found soon and the chimpanzees will be recovered.

Thousands on alert in Indonesia’s Java after Mt Semeru eruption