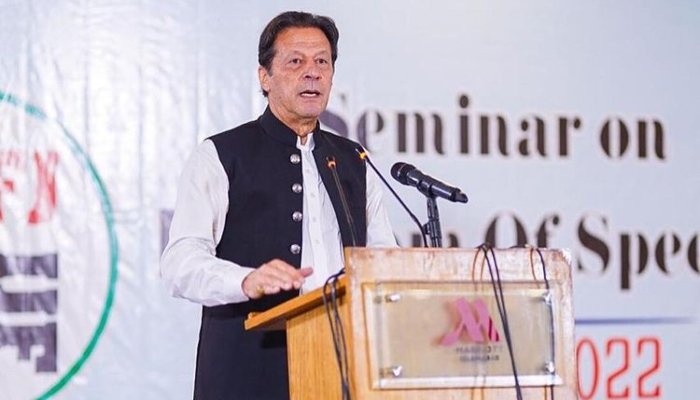 ISLAMABAD: PTI Chairman Imran Khan on Saturday termed “U-turns” crucial for political leaders and generals and insisted the country could not afford a “weak” army.

Addressing a seminar in the federal capital, the former prime minister said mistakes happen, and one should take a step back to reconsider that they have made a mistake.

The ex-premier said the country could not afford a “weak army” as it is the nation’s asset.

“Increasing distances between the army and the nation would be a loss for Pakistan and its armed force both,” said Khan.

The PTI leader reiterated that his struggle was to get rid of the Sharif and Zardari families from the political front “who have been taking turns to rule the country for the past 30 years.”

The former PM said freedom of expression was crucial for any nation, and no society can thrive without it.

Khan asserted the media was never a threat to him, nor he took any action against it during his tenure.

“I have never done anything wrong and never stole anything from the nation. I will not allow others to do it as well,” said the PTI chairman.

Those families (Sharifs and Zardaris) controlled the media and judiciary to cover their corruption, he added.

“They have said that the case is being taken to the court,” he added.