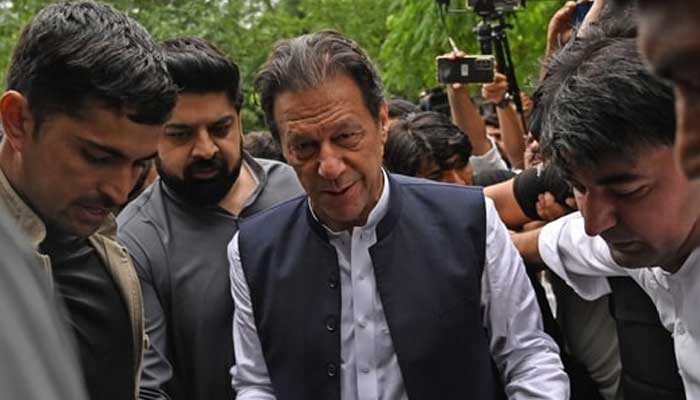 
ISLAMABAD: Hours before a five-judge larger bench of the Islamabad High Court (IHC) was to resume hearing of a contempt of court case against former prime minister Imran Khan, the PTI chairmen on Thursday morning filed a miscellaneous application before the court seeking permission to submit written arguments in the case.

In his fresh plea, Imran Khan argued that the high court cannot exercise suo moto jurisdiction as per the Constitution. The arguments on the inadmissibility of the contempt case should be kept on record.

“The written arguments will also be explained during the course of the proceedings,” read the plea.

It is pertinent to mention here that a five-judge larger bench of the IHC will resume hearing of the contempt of court case against the PTI chairman at 2:30 pm today.

PTI Chairman Imran Khan to appear before the court in his personal capacity.

A day earlier, Imran Khan submitted a supplementary reply in response to the show-cause notice issued to him by the IHC for threatening a judge in which he expressed “deep regret” over his “unintentional utterances” during a rally in Islamabad on August 20.

The former prime minister appreciated the court’s observations made in the last hearing and the opportunity given to him to submit a “well-considered” response.

The PTI chairman’s controversial remarks about district and sessions judge Zeba Chaudhry, who had approved his chief of staff, Shahbaz Gill’s physical remand in a sedition case, sparked a strong reaction and a terror case was filed against him.

The IHC also took notice of the matter and summoned the PTI chairman to appear before it on August 31.

Disappointed with the response, the IHC gave him another opportunity to consider apologising for his behaviour.