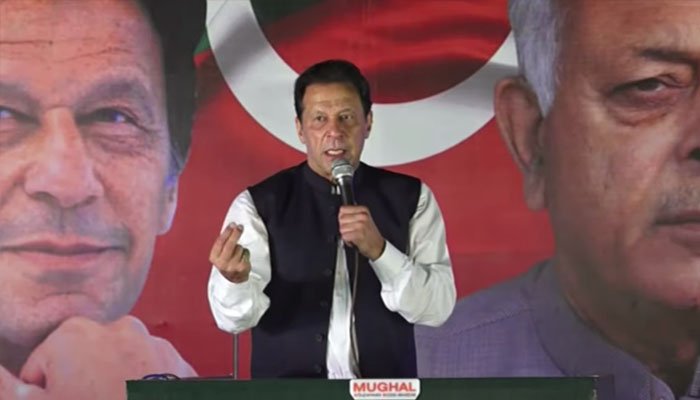 Imran Khan challenges govt to arrest him instead of giving threats


Former premier and PTI Chairman Imran Khan Sunday challenged the incumbent government to arrest him and put him in jail instead of giving threats.

“This is the movement of real freedom, I am ready to go to jail and my nation as well. We are not afraid of jail,” said Imran Khan while addressing a public gathering in Taxila.

The former premier made these comments after obtaining interim bail in a case related to his controversial remarks against a judge and senior police officials in an Islamabad rally on August 20. The PTI chairman had approached the Islamabad High Court (IHC) on Sunday after his arrest warrants were issued after he failed to appear before the court.

Imran Khan lambasted Finance Minister Ishaq Dar and PML-N supremo Nawaz Sharif and alleged that they had been given NRO.

“Ishaq Dar is a bigger coward than Nawaz Sharif. The powers that be have promised him NRO, otherwise he would not have returned to the country,” he claimed.

PTI chairman said that PPP and PML-N had quadrupled Pakistan’s debt from 2008 to 2018, but now they had been given NRO again.

Speaking on the missing cypher, the former premier said Maryam Nawaz has given a new life to the cypher.

The PTI chief censured the incumbent government over the skyrocketing inflation and fuel prices. He predicted that gas prices will be increased up to 250% in the winter season.

He blamed the rulers for coming into power to get their corruption cases quashed and claimed that they amended laws to get legal relief for continuing corrupt practices.

The ex-PM further alleged that the Chief Election Commissioner (CEC) was acting like a servant of the present rulers. He added that they could not defeat the PTI in fair and free elections.

He challenged Prime Minister Shehbaz Sharif and Interior Minister Rana Sanaullah to get ready for the upcoming PTI protest as he was giving final touches to his preparations.

“I knew about their plan but they are completely unaware of mine. I am preparing for it and I will suddenly give you a call. You have to be prepared.”