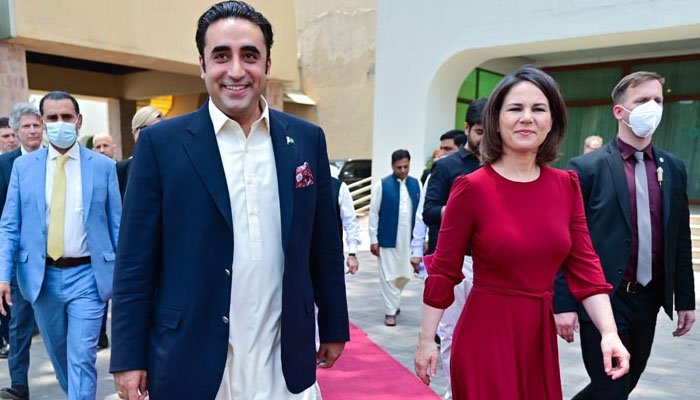 ISLAMABAD: Germany’s Foreign Minister Annalena Baerbock on Tuesday arrived in Islamabad on a two-day maiden visit, at the invitation of her Pakistani counterpart Bilawal Bhutto-Zardari.

During the visit, the two foreign ministers will hold delegation-level talks on the entire range of bilateral matters and exchange views on regional and global issues.

After landing in the federal capital, Annalena Baerbock visited the Ministry of Foreign Affairs. Upon her arrival at the ministry, Foreign Minister Bilawal Bhutto, Minister of State for Foreign Affairs Hina Rabbani Khar and other senior officials accorded her a warm welcome, Radio Pakistan reported.

The German FM along with Bilawal Bhutto Zardari also planted a sapling in the premises of the Foreign Office.

Germany is a valued partner of Pakistan, both bilaterally and in the context of the European Union.

The visit of the FM Baerbock is part of regular high-level exchanges between the two countries and is expected to impart further boost to the multi-faceted Pakistan-Germany relationship.