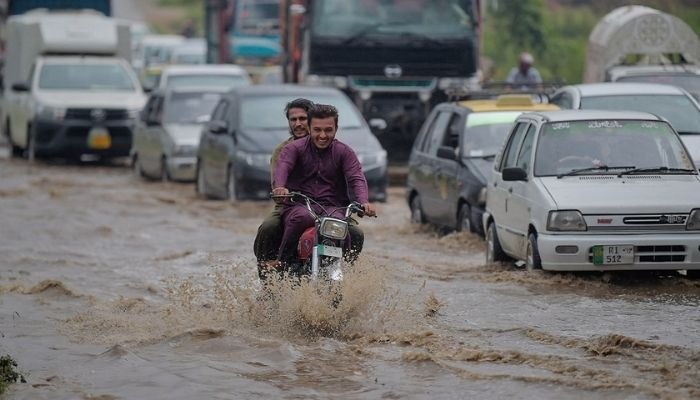 Sector H13 of Islamabad was particularly flooded due to the heavy rain, with water entering the basements of buildings in the neighbourhood.

People incurred millions of rupees worth of damages and rescue teams could not enter the area to aid those stranded.

Later in the morning, Commissioner Irfan Nawaz said that The Metropolitan Corporation Islamabad along with the district administration were draining the water with de-watering pumps.

The Pakistan Meteorological Department has forecast that the weather will remain hot, humid, and partly cloudy in the majority of the country today (Saturday), whereas thunder and precipitation are likely in Islamabad, Punjab, Khyber Pakhtunkhwa, and Balochistan.

Meanwhile, rain with strong winds and thunderstorms is expected in lower Sindh and Kashmir.

In Rawalpindi, the Water And Sanitation Agency (WASA) has issued a high alert.

Heavy equipment has been delivered to low-lying areas, and authorities are monitoring the water flow in Nullah Lai, according to the WASA Managing Director, Muhammad Tanveer.

According to MD WASA, the twin cities of Islamabad and Rawalpindi have received a total of 55mm of rain. He said the water level at the Katarian point of Nullah Lai is 12 feet, while at Gawalmandi Bridge is nine feet.

According to the Met Department, 56mm of rainfall at Zero Point and 54mm at Golra 54mm was recorded in Islamabad,

Meanwhile, 45mm of rain fell in Shamsabad and 43mm in Chaklala.

The Met Department said that intermittent rain will continue until tomorrow.