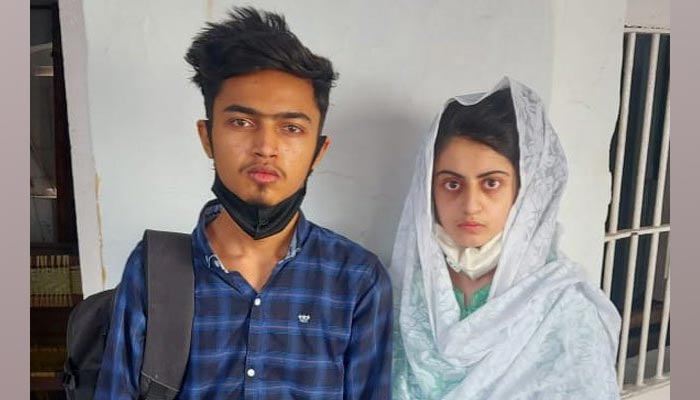 Dua Zahra — the girl who was reported missing from Karachi on April 16 but was recovered from Punjab later and declared that she had run away from her home to marry 21-year-old Zaheer Ahmed — has appealed to her parents to “stop humiliating” her through court cases.

Speaking to a private TV channel flanked by her husband, Dua pleaded: “Stop humiliating me now, don’t get me involved in more court cases, I know how I travel all day from Lahore to Karachi in a police van.”

The family of the teenager has been employing their best efforts to acquire her custody and has filed multiple cases in court, claiming that their daughter was kidnapped by Zaheer as she was a “minor” and could not have gotten married due to her age.

According to the latest medical board’s findings, the girl is between 15 and 16 years and the laws in Sindh and Punjab do not allow for marriage at that age.

Claiming threats to her life in Karachi, Dua said she will not go to her hometown under any circumstances because she fears her life is “in danger” there.

“If my parents want to kill me by doing all this, let me know. I will kill myself.”

During the interview, she said: “My parents have been lying since day one. They know why I left home in the first place.”

She further added that her parents had read her and Zaheer’s chat after which they “beat” her so badly that she “got bruises on my neck”.

“I would say [providing your children] facilities is not everything. Parents should also be friends with their children.”

“I know how I spent my time in Lahore in the initial days. We remained hungry for several days. I stayed in parks and on the streets to avoid the police, but now, thank God, things are better.”

Speaking on the occasion, in response to a journalist’s question, Zaheer said: “I had told Dua three times before the court marriage that we would get married with the consent of all. Even today, I respect Dua’s parents and tried to mend fences with them many times but they responded negatively.”