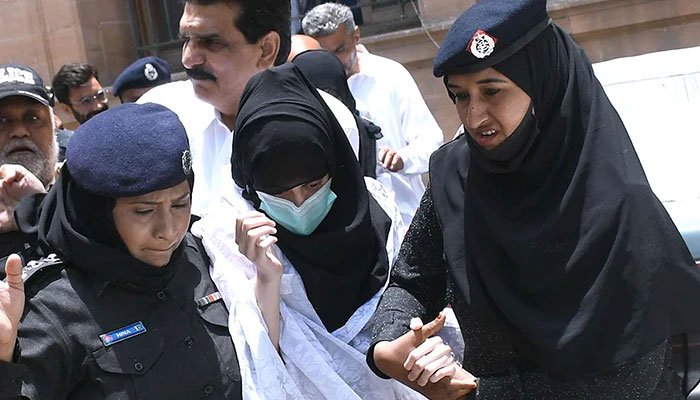 KARACHI: The judicial magistrate (East) on Wednesday directed authorities to present the phone call records of the period April 15 to 19 of Zaheer Ahmed, the boy who allegedly kidnapped and married teenager Dua Zahra.

Dua Zahra was reported missing by her parents in mid-April. She was later found to have married Zaheer Ahmed in Lahore.

During the hearing today, the court asked whether Zaheer was in Karachi or Lahore on April 15.

The IO said Zaheer was not in Karachi on April 15 and 16 as per the call data record (CDR) for the number that was provided initially.

He said that the CDR of another phone number provided later has to be fetched.

At this, the court directed the IO to submit the CDR of the new number at the next hearing. It also sought an additional challan in the case, while adjourning the hearing till July 20.

During the hearing, Jibran Nasir, the lawyer of Dua Zahra’s father Mehdi Kazmi, maintained that the challan for making the case class-C was rendered inadmissible due to orders of fresh investigation.

He said that the suspect was accessible to the police in Karachi but the police didn’t arrest him. He claimed that Zahra was repeatedly compelled to lie, but wondered  “on whose insistence” the child did it.

“Who would be held accountable if the suspect in Zahra’s alleged kidnapping flees the country,” Nasir asked, adding that the suspect must appear in court and fight his case.

“How did you take the statement of a suspect who has yet to be arrested?” the court asked the government’s counsel.

Meanwhile, the Sindh High Court (SHC) issued notices to the Sindh Health Department, Home Department, Sindh inspector general of police, Zaheer Ahmed and others seeking their replies by July 21 over Kazmi’s new plea seeking the recovery of the teenager.

Kazmi filed a new plea yesterday, basing his case on the findings of the medical board, which determined the girl’s age to be between 15 and 16 years.

The petitioner requested action against Zaheer if “rape” is proved in medical tests. He claimed that Zaheer took Zahra to Punjab to marry her and mentioned her age as 18 in the marriage contract to declare it valid, as none of Sindh or Punjab’s laws allow marriage before 16 years of age.

Kazmi requested the court to order Zahra’s recovery from the “illegal custody” of Zaheer, hand her over to the parents and restrict Zaheer from taking the girl out of country.